It’s been a long three days living in the 90-degree Coachella bubble—we suffered through heatstroke, unrelenting traffic, and even MGMT’s set, and we somehow made it to the other side with all our body parts intact. By Sunday, Coachella had slowed to a relaxed hum—that is, until Thom Yorke treated everybody to a dance party, and Gorillaz ended the fest with a colorful, funky and ultimately triumphant performance. While we smother our sunburns in aloe, check out our round-up of the last day of the desert music fest below.

Most Appropriate Stage Name: Little Boots. The Brit pop singer was so tiny (standing at about 5′, sans boots), we could barely see her on stage. (Her awesome laser light show helped us spot her, though.) See our terrific Little Boots photos here.

Approximately How Far Back From Thom Yorke I Was: About five trillion miles. And I was in the middle of the crowd! (Okay, seriously — it felt like half a mile. Thom draws himself a crowd.)

Biggest Surprise: To be honest, I’m not as familiar with Thom Yorke’s solo material, though I’ve seen Radiohead in concert a few times and, while they’re astounding, their albums are not often described as “booty-shaking”. Atoms for Peace’s set, however, became the dance party of the weekend—I was shaking and grooving like I was in a dance competition and I was about to win myself a brand new car. And I wasn’t the only one. (Then again, if you were anywhere near the front of the stage, you probably didn’t have enough room to blink, let alone shake a tailfeather.)

Most Welcome Repeat Viewing: While performing many of their singles (such as “Stylo,” “Clint Eastwood” and “Feel Good Inc.”), Gorillaz played the entire music video for each one on a giant screen behind them. (They even kicked off their show with the trailer for Plastic Beach.) We’re pretty sure most Gorillaz fans in the crowd have seen all their vids already, but when your visuals are as entertaining, gorgeous, funny and imaginative as these, you can and should play them as often as possible. (Heck, we wouldn’t have minded seeing them behind David Guetta either).

Most Welcome Repeat Listening: Thom Yorke treated the crowd to two Radiohead songs—OK Computer‘s “Airbag” and “Everything In Its Right Place” from Kid A—accompanying himself on guitar and piano. He really didn’t have to, as most of the crowd would be perfectly content just listening to Thom Yorke read the dictionary aloud, but it was a great way to please all the massive Radiohead fans at the fest.

Most Expected On Stage Pair-Up: Gorillaz and De La Soul. I called it last week — you just kind of knew that the acclaimed hip-hop group would join the headliner for their brilliant collabs, “Feel Good Inc.” and “Superfast Jellyfish”. (One giant hint: De La Soul played the fest the same day). Expected, yes, but still tons of fun.

Most Unexpected Stage Production: Infected Mushroom’s infected mushroom, paired up with the flag of their home country, Israel.

Best Gwen Stefani Impression: B.o.B., who got down on the ground and did a few push-ups during his set. (We think it’s about time Gwen released an excercise video, don’t you?)

Kindest To Deaf Music Fans: Gorillaz added a sign language interpreter to their set, signing all the lyrics for the crowd.

If Coachella Was A Scented Candle, It Would Smell Like: Weed and hot dogs.

Song Everyone Apparently Knows: On the way out of Coachella, a huge group of  festgoers began to sing Biz Markie’s “Just a Friend.” Biz Markie, the great unifier.

The Only Celebrity I Saw At Coachella, If You Even Want To Call Her That: Kelly Osbourne, with her boyfriend in the VIP area, holding hands and being cute. Where the heck were all these stars hanging out? The super-super-deluxe-VIP area, where you need a wristband made of unicorn hair to get in?

Saddest Person To Be Forced To Go To The Car Wash Today: The owner of this happy car. Don’t worry, another Coachella is just 364 days away! 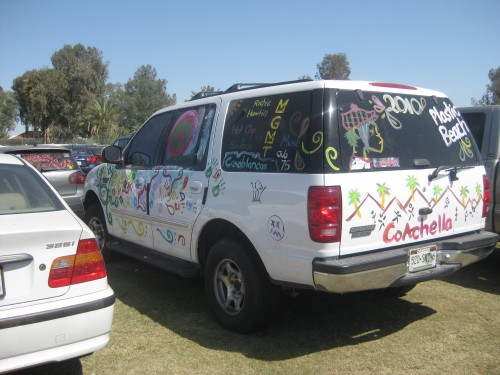