Lady Gaga still has yet to admit that sultry male model/mechanic “Jo Calderone”, appearing in a Vogue Hommes Japan photo shoot, is indeed her in drag. But being that a) this shoot was photographed by Nick Knight and styled by Nicola Formichetti, both frequent Gaga collaborators b) it looks exactly like Gaga and c) why would a fashion magazine give two covers and conduct an interview with a mechanic, however hot he is?—we don’t think she needs to.

The second cover and a preview of “Jo”‘s interview after the jump.

Here’s another alternative cover of the same issue: 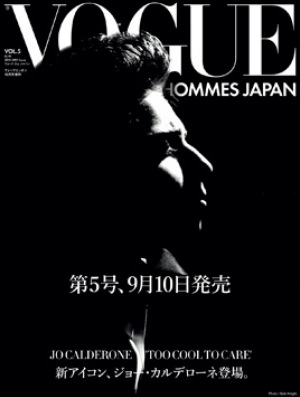 And check out a little bit of the interview with the mystery “man”:

Where are you from? Palermo, Sicily

How would you describe what you do / your occupation? Mechanic for my dad’s business. This is the first time I’ve had my picture taken.

When did you discover you wanted to do this? Well, I always helped my dad at work, since I was a kid. I thought it would be fun to have my picture taken.

What are your ambitions? I’d love to own my own car shop, I have a bunch of my own ‘muscle’ cars. Maybe if I take some more pictures I can afford it.

What is your relationship with Lady Gaga? I met her at a shoot Nick Knight was doing. She’s fuckin beautiful, and funny, and interesting. I was a little nervous for Nick to start shooting. She said, “Don’t be baby, you were “born this way.” I took her out after. The rest is private ;)

Looks like somebody’s been watching Just One Of The Guys on cable recently.