Madonna’s “Give Me All Your Love” Demo: Review Revue

When Madonna’s demo for upcoming single “Give Me All Your Love” leaked yesterday, she and her manager chose to express themselves quite clearly. “My true fans wouldn’t do this,” Madge is quoted as saying to her manager Guy Oseary, via Billboard. Oseary himself added that “the plan was for new music to come out in the new year, and yet someone leaked a demo version of a song yesterday. I’m very happy with the positive reaction to the demo, but we are very upset with whoever leaked the song!!!”

Still, leak it did, and this led us to poke around and see what the online response was to the Harper’s Bazaar cover girl‘s first offering — again, in demo form — from her upcoming 12th studio album. Head below for a roundup of reviews! :: First off, Billboard notes of the song’s leak, “Within a few hours, it was among one of the top 10 trending topics worldwide on Twitter.”

:: CNN has pom poms raised high: “The intro, ‘L-U-V Madonna/Y-O-U You wanna?’ calls to mind the peppiest cheerleader chant imaginable before you fall into an irresistibly catchy track.” (To see all the lyrics, head over to Direct Lyrics.)

:: Neon Limelight is a fan: “The rest of the song plays out as an upbeat, super-dancey and fun track that also includes a quick dubstep breakdown.”

:: Arjan Writes delivers this verdict: “Madonna’s teaming with Martin Solveig is a winner. The song is fresh, fun, hooky and totally now. The Queen is going strong.”

:: Meanwhile, Pink Is The New Blog is having a full-on Madge Attack: “DYING!!!! I am loving this track. It’s fun, very poppy Madonna.”

:: NME brushes aside those not getting into the groove: “There have been criticisms that the bouncy lyrics (‘Give me all your love/ Let’s forget about time and dance the night away’ goes the chorus) are neither befitting of the grande dame of disco nor are indicative of the type of lyrics she should be penning at this stage in her career… Blah, blah, blah, frankly. Because what Madonna’s doing in this song is so much more impossibly fun than we could have imagined that all of that talk seems unimportant.” 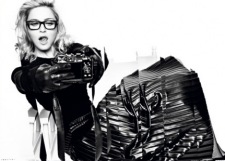 :: Chart Rigger hears certain influences on the track: “It sounds like [Madonna’s] own classics ‘Burning Up’ and ‘Beautiful Stranger’ crossed with Pink’s ‘Feel Good Time’.”

:: Zap2it.com senses yet another vibe: “To be honest, we could picture a younger pop star like Avril Lavigne singing this song comfortably too.”

:: The Smoking Section is high on the song’s playful nature: “While her last album, Hard Candy, yielded moderate chart success and produced contemporary-yet-forced lead singles, ‘Give Me All Your Love’ is a dumbed-down, yet completely irresistible jam that is catered to win.”

:: Pop Crush is also skipping along to the beat: “While Madge at 50 (and some change) is hardly a girl, we like her youthful and jubilant nature on this song. She’s the Material Girl always, not the Material Woman!”

Enough of the critics — what do you think of Madonna’s new song? Let us know below!