Bruno Mars holds the dubious honor of being one of only ten gents to ever grace the cover of a magazine that tends to prefer featuring buxom, scantily-clad ladies in its pages. To celebrate, the Grammy performer partied at the Playboy Mansion with Hugh Hefner, some lovely bunnies, and stars like Chris Martin, Estelle, and Britney Spears, where he covered such songs as Michael Jackson’s “Dirty Diana” and Ginuwine’s “My Pony” (now that we’d like to hear!). Catch a photo of Bruno with Hef below. 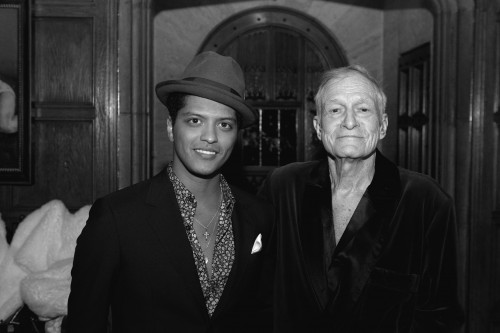