Ciara Covers L’Uomo Vogue, Talks About Her Sixth Album: “I Talk Openly And Honestly About My Emotions”

Ciara is taking no chances with her upcoming sixth LP. For starters, she called up producer Dr. Luke.
MORE >>

Ciara isn’t taking any chances with her upcoming sixth LP. After misfiring completely with 2010’s Basic Instinct and still falling short with 2013’s very good self-titled album, the enduring R&B diva is bringing out the big guns this time around. She’s already hit the studio with super producer Dr. Luke and is rumored to be putting the finishing touches on the lead single with Harmony Samuels. Why the no-holds-barred attitude? The 29-year-old is doing it for her child.

“For him I want to be the best mother in the world, and also the best business woman,” CiCi told L’Uomo Vogue. “I want to be very rich, because that’s the only way I will be able to do everything I want to”. The singer/dancer’s relationship with baby Future will also shape the content of the as-yet untitled album. “It will be an authentic album, real. I talk openly and honestly about my emotions as a woman, mother, about my ambitions, but also my vulnerability, my happy moments and my sad moments.”

While it sounds like Ciara’s music is headed in an earthier direction, she’s looking more glamorous than ever. She cuts a striking figure on the cover of L’Uomo Vogue with her long, flowing locks and stuns in the black-and-white photo shoot. See more pics from the spread after the jump.

So Excited To Share My #LuomoVogue Cover Shoot With You!!!!!!!!!!!!!!! @francasozzani1 You're Everything. You Inspire Me. I Admire You. THANK YOU. Photography By: @francescocarrozzini Makeup By @yolondafredrick Hair By @brentlawler Nails @mihonails Fashion Editor #AyakoComte Fashion Assistant #AmandaPine #Gucci Coat #Givenchy Bra #2015 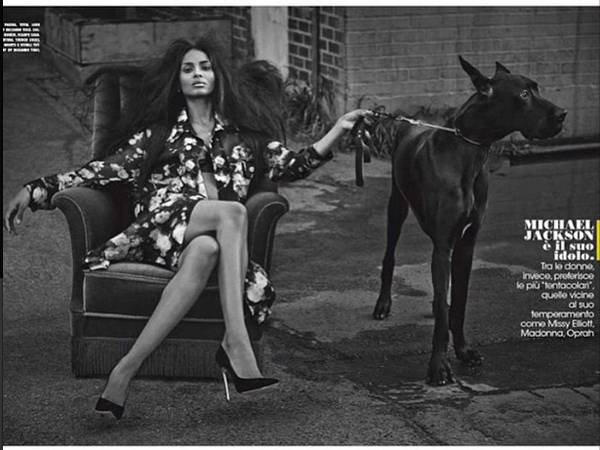 Are you ready for CiCi’s new album? Let us know in the comments below.