Ellie Goulding was feeling a little bit shady this evening — or, really, just as shocked as most of the general public — when she decided to tweet about Natalia Kills and Willy Moon‘s bizarre, bullying rant that cost them their judging jobs on X Factor New Zealand.

After the married couple went in on a contestant for allegedly stealing Moon’s suit and slicked-back hair aesthetic (?), Ellie had her own thoughts on the matter. “You sort of have to be, you know, vaguely relevant to have your style stolen just saying,” she tweeted at first.

“Wellll I can shade too. Wait is that the right word?!” she replied to a fan who gleefully praised her for the comment. Unfortunately, that moment didn’t last long: Ellie deleted the tweet minutes later. But too late! Tumblr kept it alive, screenshotted and circulating. (Don’t worry — her paints nails emoji response suggests she’s not too bothered by that.)

Instead, she engaged in a brief Twitter chat with UK presenter Eoghan McDermott, who wondered whether it was a stunt or genuinely awful stunt. “Nah just genuinely awful because I’m not sure they were intent on ruining their careers FOREVER,” she said.

She left off with a tweet (that she didn’t delete) about the situation overall:

Can’t stop myself from commenting on NZ X factor situation because I can’t stop thinking about how mean it was. Thank goodness they’re gone

What do you think about what Ellie had to say? Do you agree? Sound off in the comments below. 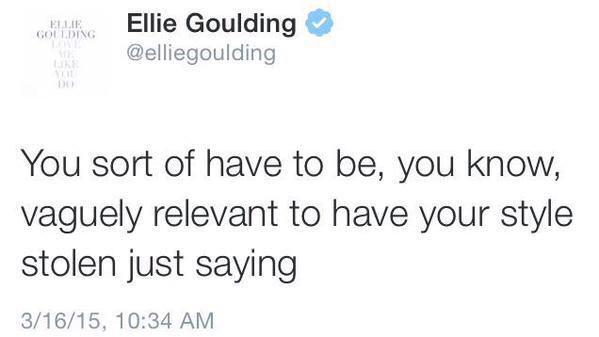