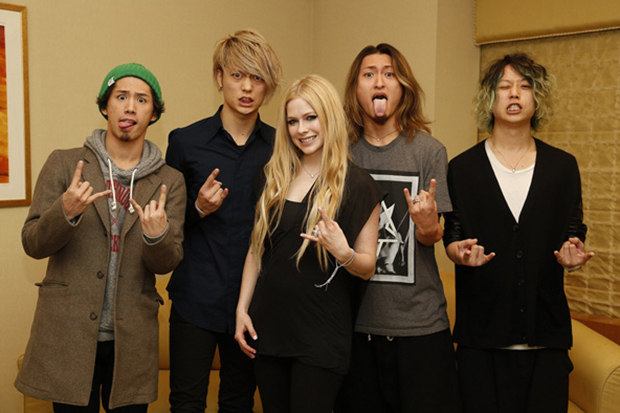 Avril Lavigne kicks off 2017 by featuring on a new track with ONE OK ROCK.
MORE >>

Avril Lavigne means business this year. The 32-year-old has already dropped a new track (ONE OK ROCK collaboration, “Listen”) and is adamant about releasing a new album. “I wanted to first thank my fans for your patience & support during my time away throughout my battle with Lyme Disease over the past 2 years,” she captioned a New Year’s message on Instagram. “It hasn’t just been a hard battle but it’s also been enlightening and will reflect in my new music, artistry, life, and personally.”

“I’m really happy to announce that I am now working on new music and I will be releasing a new album in 2017. I can’t wait to open up and share my heart with you!” The “Complicated” hitmaker is keeping fans in the loop by teasing lyrics and song titles on social media. “Storms are seasonal but strength is forever… When you’re feeling “CRUSHED” remember you have a “WARRIOR” inside of you waiting to fight,” was her first cryptic message. She all but confirmed “Warrior” as a song title in a subsequent post: “‘I won’t bow I won’t break’ #warrior #newlyricalert #AL6.”

It all sounds very feisty and inspiring, which probably has something to do with Avril getting her groove back — physically and mentally. “Old chapters closing and new ones opening… feels good to be writing new songs,” she wrote in another Instagram post, before adding this new lyric: “‘I am stronger and I’ll fight’ #songwriting #newlyricalert #newmusic.” Hopefully, we’ll hear something new in the next couple of months. See her social media updates below.

Old chapters closing and new ones opening …..feels good to be writing new songs. "I am stronger and I'll fight" #songwriting #newlyricalert #newmusic

Are you excited for Avril’s new album? Let us know below, or by hitting us up on Facebook and Twitter!