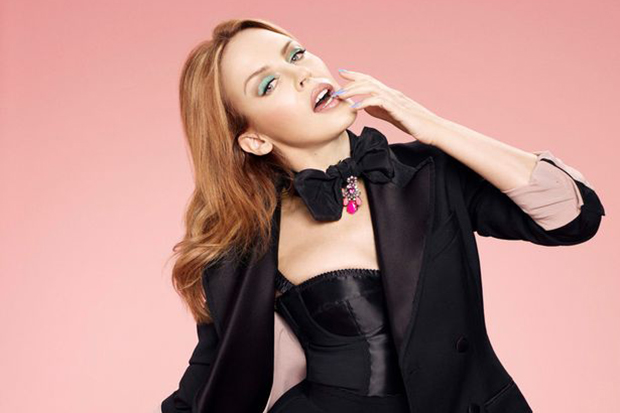 Kylie Minogue is back in the studio working on her 14th album. Find out more.
MORE >>

It’s official. Kylie Minogue’s 14th album (people seem to have forgotten about Kylie Christmas) will arrive later this year via BMG. Label president Alexi Cory-Smith broke the news in an interview with Music Week. “We want to make a great, big, classic Kylie pop record,” she said. “Thirty years she’s been in the business, and she’s better than ever before.” And it sounds like they’re planning to do things a little differently this time. “There’s so many different opportunities and with our reach into multi-media the possibility of making a documentary or book with her – it’s all possible. She’s just the ultimate artist.”

This is great news! Kylie has been chipping away at the project since early 2016, so I’m glad it finally has a home. So, who is she working with? The flawless 48-year-old hit the studio with long-time collaborator Guy Chambers (“Loveboat,” “Kids” and “Your Disco Needs You”) last February and then worked on hits with Bonnie McKee and Cutfather a couple of weeks later. Time will tell if those sessions were fruitful or if she’s starting from scratch. (I’m guessing the latter). She also mentioned Richard Stannard and Karen Poole as potential collaborators when I interviewed her way back in 2015.

Prepare yourself for new Kylie by revisiting the magic of “Get Out Of My” below.