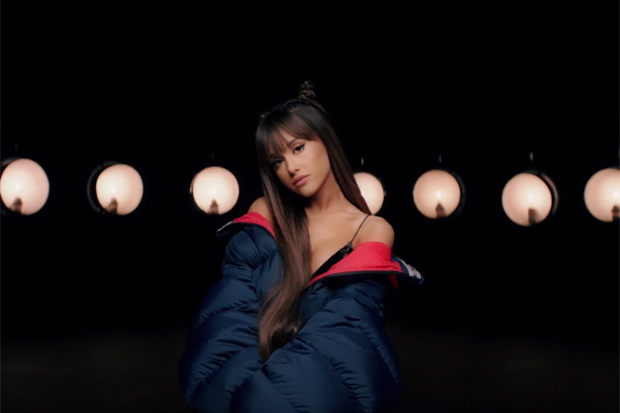 The 'Dangerous Woman' actually appears in the lyric video for the Future-featuring banger.
MORE >>

Ariana Grande hit back at slut-shamers on February 3, when she launched her Dangerous Woman tour at Phoenix, Arizona’s Talking Stick Resort Arena.

An interlude shows her glistening in dance gear, recalling Flashdance, though with choice words flashing on the screen. Some, like “GROUNDED,” “PLAYFUL” and “SEXUAL,” could well have been featured on the moodboard for her Sasha Fierce lite album. But one phrase in particular — “NOT ASKING FOR IT” — responded directly to those who confused sexual empowerment for “an invitation for disrespect,” as Ariana says.

Back in December, Ariana opened up about an incident where a fan of rapper boyfriend Mac Miller spotted her and said, “I see you hitting that.” “This may not seem like a big deal to some of you but I felt sick and objectified,” she said. Critics included right-wing activist Lauren Southern, who posted pics of Ariana wearing leotards on stage and in promo pics and said, “Tfw you really don’t want guys to objectify you.”

See Ariana Grande’s response via the Dangerous Woman tour below.