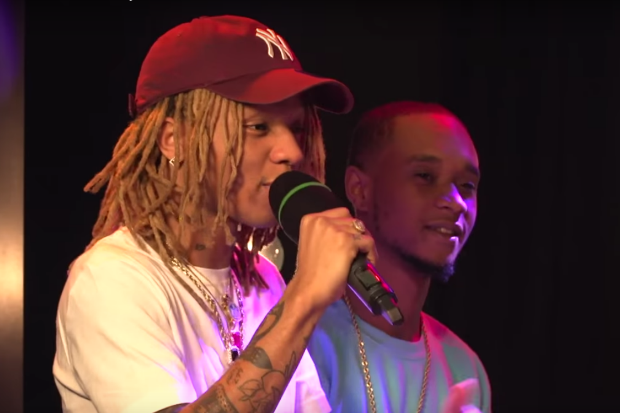 Swae Lee and Slim Jxmmi rap over the "99 Problems" instrumental on a Dutch radio show.
MORE >>

Rae Sremmurd just previewed a surprise collaboration. During its sold-out concert at Prague’s Lucerna Palace, Slim Jxmmi had the DJ cut off SremmLife2‘s “Set the Roof on Fire” to tease a good portion of a song featuring Gucci Mane and Kendrick Lamar.

Gucci, of course, was featured on the Tupelo, Miss., hip-hop duo’s No. 1 hit “Black Beatles.” But for KDot to appear in the mix is completely unexpected — unless, of course, you consider who produced it.

As Genius points out, Mike WiLL Made It — hit-making producer and head of Rae Sremmurd’s label Ear Drummers, who has worked with Kendrick before — also teased the track during a club gig late last month. Fan footage from that set even features part of Kendrick’s verse.

Rae Sremmurd’s collaboration with Gucci Mane and Kendrick Lamar is reportedly being featured on Mike WiLL Made It’s upcoming album Ransom 2, which also includes “Nothing is Promised” featuring Rihanna. Preview the track below.