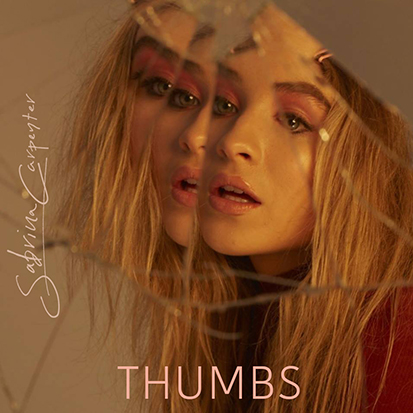 "Thumbs" is shaping up to be Sabrina Carpenter's breakthrough hit.
MORE >>

Sabrina Carpenter has a hit on her hands with “Thumbs.” Written by Steve Mac and Priscilla Renea, the perky pop anthem grabs your attention with the opening strings and holds it with oddball lyrics and an obscenely catchy chorus. “Somewhere in the world they think they’re working for themselves, they get up everyday to go to work for someone else,” the Girl Meets World actress muses. “And somebody works for them and so they think they got it made, but they’re all just working to get paid the very same.” This is either poetry or complete nonsense, but I’m hooked regardless.

The track has been steadily gaining ground on pop radio since January and is hovering just outside the top 100 on iTunes. With the arrival of a deceptively clever visual, don’t be surprised if “Thumbs” becomes Sabrina’s first entry on the Billboard Hot 100. What happens in the video? Well, the 17-year-old rides the subway and people-watches for three and half minutes. There’s also a little choreography, but it’s mostly about watching the world go by — which ties in nicely with the song’s concept. Watch up top.

#ThumbsMusicVideo is out now!!👍 what are u still doing reading this (link in bio)