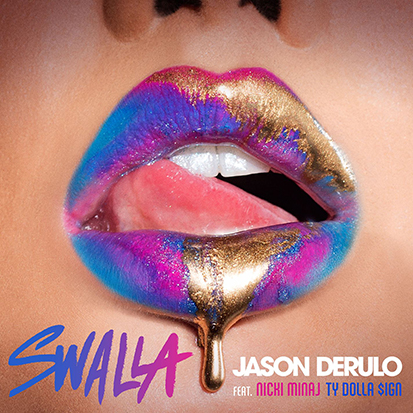 Jason Derulo has a hit on his hands with sexually-explicit banger, "Swalla."
MORE >>

After a couple of months on hiatus, I’ve decided to revive The Drop. Why? Well, every week we’re bombarded with a glut of new music, which can lead to ear candy falling through the cracks. I’m hoping to circumvent that tragic scenario with a cheat sheet (of sorts) to get you through New Music Friday. By now, you’ve probably already heard Meghan Trainor’s catchy Smurfs anthem “I’m A Lady” or bopped along to Jason Derulo’s semi-pornographic banger, “Swalla.” But that’s just the tip of the pop iceberg.

Let’s start with the female artists. Billie Eilish impressed everyone with gorgeously gloomy debut single “Ocean Eyes” and was crowned The Next Big Thing with the arrival of “Six Feet Under.” The 15-year-old (!) continues to impress with “Bellyache,” which is positively upbeat by her standards. Another singer/songwriter to keep a close eye/ear on is Emma Dewing. She proves that 2016 gem, “Beautiful Mess,” was no fluke with “Buttons” — a hugely relatable bop about the micro-aggressions that are part of any relationship.

In the mood for something a little more upbeat? Hailee Steinfeld’s evolution from teen-pop diva to edgy club queen continues with “Show Me Love.” She cut her EDM teeth on Zedd & Grey’s “Starving” and the followed it up with Digital Farm Animals’ “Digital Love.” Those tunes were still rather pop-centric, but Kato & Sigala take her in a clubbier direction. Now for a total newcomer. Berlin-based Lxandra wasn’t on my radar until today (February 24), but “Flicker” stopped me in my tracks. Between her powerful voice, the soaring chorus and elegant production, this is something of a find.

If you’re looking for a radio-ready pop, look no further than Life Of Dillon. You might remember the then-trio from 2015’s “Overload.” Well, since then, they have shed a member and overhauled their sound. “Rocks” veers towards Lukas Graham territory with its folk/pop production and contemplative approach. It really works for them. Another duo returning today is POWERS, comprised of songwriters Mike Del Rio and Christa Ru. The addictive, ’80s-influenced jam evokes Blondie and, somewhat inexplicably, Ashlee Simpson’s (amazing) Bittersweet World album. I’m into it.

It’s also a big week for Latin-pop with Enrique Iglesias rolling out his annual summer smash a couple of months early. “Subeme El Radio” finds the heartthrob reuniting with “Bailando” producer Descemer Bueno and it’s every bit as catchy as that monster hit. Expect this to do serious damage in Spanish-speaking markets and spawn an English version. Speaking of which, Play-N-Skillz drop a Spanglish take on their hit “Si Una Vez,” which samples Selena’s similar-titled bop and features the heavenly vocals of Becky G. Stream in it my playlist below.