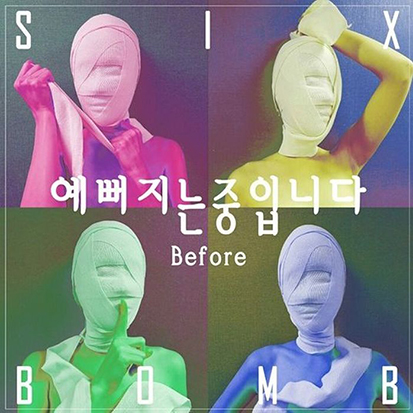 Korean girl group Six Bomb made headlines around the world earlier this month when they announced they were getting plastic surgery to promote their new two-part single, “Becoming Prettier.” After documenting their clinical consultations and pre-surgery prep in Part One, the plastic fantastic quartet are back to flaunt their new faces in Part Two, “Becoming Prettier (After).” And mercifully, they don’t look as different as their mummified promo pics suggest.

In fact, they look pretty much the same to me apart from new hair and makeup. (On closer inspection, they might have had nose jobs). Not that I wanted Six Bomb to become plastic surgery junkies like Heidi Montag or Park Bom, but I’m starting to think this is a case of false advertising. In any case, the ladies should have saved their money and invested it in an actual budget for their music video. This clip is so cheap it looks like it was filmed on an early Samsung Galaxy smuggled out of North Korea.

As for the song, it’s a so-bad-it’s-good slice of electro-pop. It’s not going to dethrone Girls’ Generation any time soon, but it works as a novelty. Watch the before video below and then check out the after visual up top.

Was it worth it? Let us know below, or by hitting us up on Facebook and Twitter!