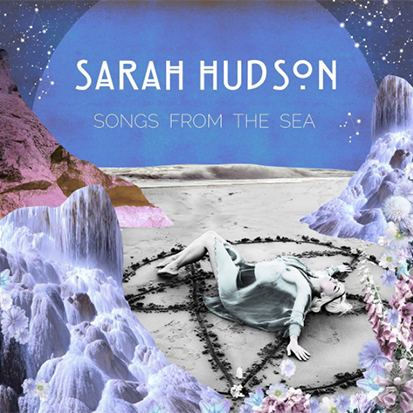 Sarah Hudson has carved out a reputation as one of the hottest songwriters in pop with credits on Katy Perry’s “Dark Horse,” Iggy Azalea’s “Black Widow” and Charli XCX’s “Babygirl.” In between writings sessions, however, she has been chipping away at her own passion project. Inspired by the ocean, the stars and all things metaphysical, Songs From The Sea is a snapshot of an artist in her creative prime. Take “Gypsy Girl.” The EP’s first buzz track, which arrives today (March 24), is a sprawling, 7-minute a cappella arrangement with Sarah singing the part of every instrument.

I’ll let her explain. “For the drums, I basically would make a low boomy sound and [producer Nico Stadi] would take it and pitch it even lower to sound like a real drum and then for the bass, the same thing and then for the hi-hats, I’d do a click sound with my mouth… it literally took us weeks.” The hard work really paid off. This is cosmic, widescreen-pop at its most authentic and adventurous. Find out more about Sarah’s concept EP (due in April) in our Q&A below and fall in love with “Gypsy Girl” at the bottom of the post.

Why did you decide to launch an artist project now?
When my band was sort of fizzling out, I was honestly so tired of touring and that grind. I was really enjoying writing with other people and taking a break from my own mind, but as I started to do that, I would write here and there for myself because I needed to express my own thoughts and feelings. I wrote a lot of this EP with Ferras. We would sit at the piano for hours, light sage, drink wine and vomit out these songs and that were only for me and for him, they were all our little babies.

I started to make the songs here and there. I started to produce them up in between sessions for other people. I needed to do this for myself and I didn’t have any intentions for what it would be, but then it started to take shape on its own. I’m not interested in being a pop star or being famous to be honest. All of those delusions of grandeur are gone for me. I just want to express myself. I felt like this was the perfect way to do it.

The EP is called Songs From The Sea. What role does the ocean play?
The first song on it is called “Mermaid.” I always been obsessed with mermaids ever since i was little. I think that I am a mermaid, that I lived in Atlantis in a past life. I wanted the whole aesthetic to be like you just drank Ayahuasca tea in an underwater kingdom. I wanted the EP to sound like a lucid Enya-like dreamscape.

The ocean has always been one of my biggest inspirations, because it’s so incredibly magical and it’s such a force of its own. These songs are like the ocean to me.

Are there really no instruments on “Gypsy Girl”?
I worked with this incredible producer who’s one of my good friends, his name is Nico Stadi and he is such a genius with harmonies and chords. We were so obsessed with Imogen Heap’s song “Hide And Seek.” We were listening to all these a cappella songs at the time and we just really wanted to do one. How we did it was, he would basically play the chords of the song. Then solo each one of them and then I would mimic each note of the chord with my voice.

Then for the drums, I basically would make a low boomy sound and he would take it and pitch it even lower to sound like a real drum and then for the bass, the same thing and then for the hi-hats, I’d do a click sound with my mouth, etc etc. We went crazy. It literally took us weeks. It felt like a never ending project but it came together so amazingly and its one of my favorite things ive ever done.

The artwork is gorgeous too. It’s like a multimedia presentation.
The whole EP is really, really visual to me… I just saw it all as I was making it. I worked with this amazing artist named Danielle Noel. She makes tarot decks and they’re called the Star Child Tarot. I found her on Instagram and her stuff was so magical and dreamy and just exactly how I visualized the art for this EP. So I reached out to her and worked with her on it. It’s very exciting when the art and music are symbiotic.

How long did it take for the project to come together?
I’ve had some of the songs for 4 years. I’d say to produce it, we took 2 or 3 years, really getting it all perfect. I worked on it in between writing sessions for other artists, in little increments of time throughout the years.

Is this the start of something bigger or a stand-alone EP?
No, I want to keep making music. I definitely don’t want it to take this long again. I want to start making the next EP this summer. It’s not like I’m not gonna be a songwriter anymore, I want to do both. I want to do it all.

Are you planning to promote the EP with any live shows or videos?
Well, I’m going make a video. I’m going to do a special little mini-movie of the whole EP. It’s gonna be really special. I love performing live, so I would love that to be in the plan. It’s not anything I’ve really hashed out yet. I will definitely do shows, even if it’s here and there.

Are you already obsessed with Sarah’s EP? Let us know below, or by hitting us up on Facebook and Twitter!