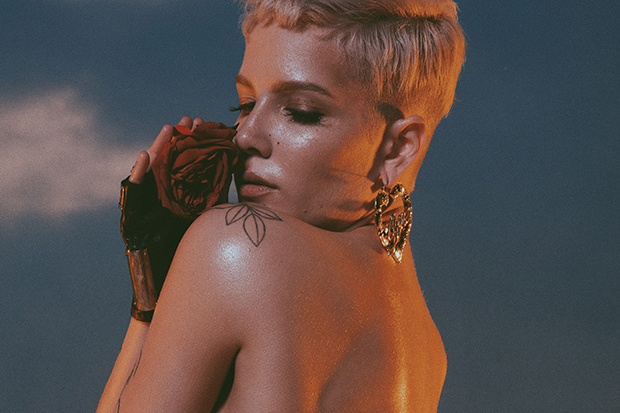 Halsey opens up about sophomore LP, hopeless fountain kingdom, in a new Rolling Stone interview. For starters, she lists a few of the producers (Greg Kurstin, Benny Blanco and Ricky Reed) and reveals that it loosely documents her break-up. “The whole reason you make a record is to figure stuff out about yourself,” she says. Part of that journey was understanding her obsession with Romeo & Juliet. “I had killed off a version of myself just so we could make our love work,” the 22-year-old confides.

“I put the seal on that relationship and fully purged myself of the feelings for that person at the same time as I finished my record.” Halsey also promises to surprise fans by trying out new styles including a piano ballad. “A lot of my sound has been attributed to this experimental pop production style,” the Badlands diva reveals, “So stripping a song back is unique for me.” Interestingly, the album was influenced by the massive success her 7-times platinum collaboration with The Chainsmokers, “Closer.”

“[The song] fine-tuned my sense about my new music,” the singer/songwriter admits. “It threw me into the deep end… I went from being this underground blog girl to being this mainstream thing.” While she’s still operating at the alternative end of the pop spectrum, Halsey is going for a more commercial sound this time around. “I am more than capable of writing radio music,” the hitmaker boasts, “and hopefully I’ll put my money where my mouth is on this album.” Read the full interview here.

Are you excited for Halsey’s album? Let us know below, or by hitting us up on Facebook and Twitter!