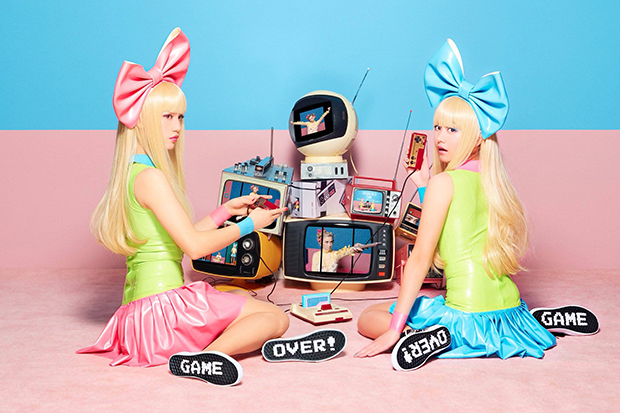 Fridays can be overwhelming for pop fans. Every week you’re bombarded with a glut of new music, which can lead to ear candy falling through the cracks. I’m hoping to circumvent that tragic scenario with The Drop — a cheat sheet (of sorts) to get you through New Music Friday. By now, you’ve probably heard Katy Perry’s tasty “Bon Appetit” and possibly checked out Kygo & Ellie Goulding’s nostalgic “First Time.” But that’s just the tip of the pop iceberg.

“Bon Appetit” isn’t the only ’90s-influenced bop to premiere today. MarcLo takes us back to the age of Montell Jordan and All-4-One on “Coogi Sweater Nostalgia,” a slick banger that references one of the era’s greatest fashion statements. The retro-obsessed singer, who is a member of The Monsters And The Strangerz, explored similar vibes on previous singles “Middle” and “Swngn.” Another artist/producer to keep an eye on is Bantu. He fuses African rhythms with pop hooks on the ridiculously catchy, “Juice.” Find out more about him here.

Next up is a pair of quirky pop divas. The ever-brilliant Allie X teases CollXtion II (due June 9) with a delicate ditty called “Paper Love.” Co-written by Leland, this is one of the LA-based singer’s catchiest tracks to date courtesy of a whistle hook and a soft, lingering chorus. Another electro-pop queen blessing us with new music is Charli XCX. She lends her voice to Whethan’s “Love Gang” and creates magic as usual. I love everything the Brit does, but this is top notch even by her lofty standards.

Looking for something a little more soothing? Jasmine Thompson rolls out the second taste of her Wonderland EP (due May 19) and it’s a bittersweet piano ballad. Co-written by Meghan Trainor, the relatable track was featured in this week’s episode of Grey’s Anatomy and is already climbing iTunes. Breakout star Sigrid is in a similarly contemplative mood. She follows up fiery alt-pop anthems “Don’t Kill My Vibe” and “Plot Twist” with a sparse, emotional track called “Dynamite.” Bring on her debut EP.

Sigrid isn’t the only Scandinavian making an impact this week. As usual, the Swedes and Norwegians punch above their weight. Tove Styrke returns today with “Say My Name” and it’s something of a change of pace from the icy synth-pop of Kiddo. She explores a warmer, more organic soundscape on the deceptively simple and devastatingly catchy song. Rebecca & Fiona can be a little hit and miss, but I can’t ignore a track called “Pop Bitches.” Not only does it have an amazing title, it also finds the duo exploring a ballsy rock sound. I’m sold!

Gabriel Gassi takes a stand for the guys on dreamy bop “Heartbreaker.” The follow-up to viral hit “Street Phone” has flecks of dancehall and what sounds like an orchestra of exotic instruments (but could just be distorted synths). Regardless, it sounds fresh as fuck. Across the border in Norway, pop/punk outfit Sløtface delivers a fiery girl-power anthem. “Magazine” finds lead singer Haley Shea raising a middle finger to absurd beauty standards — complete with a sing-along chorus and the glorious refrain: “Patti Smith would never put up with this shit.”

Closer to home, OneRepublic returns with the initially-jarring “No Vacancy.” I know Ryan Tedder likes to reinvent the band every so often, but I wasn’t expecting a dancehall anthem complete with Jamaican pronunciation. However, like everything else he touches, this is absurdly catchy and Stargate makes sure it sounds on-trend. If you’re looking for something a little more… authentic, check out Skip Marley’s timely yet somehow timeless, “Calm Down.” This wouldn’t sound out of place on one of his famous grandfather’s albums.

Singer/songwriter LP, who landed an international smash last year with “Lost On You,” bounces back with a new track called “When We’re High” and it perfectly showcases her soaring voice, emotional delivery and knack for coming at matters of the heart from a unique perspective. Another singer forging her own path is Niia, who previously featured on The Drop with jazz-fused pop anthem “Sideline.” She veers a little closer to pop on the slinky, “Nobody.” This is the most sophisticated and elegant floorfiller of the week.

Let’s finish up with a trio of bangers. After all, it’s the weekend! Los Angeles-based producer Goldroom delivers the week’s feel-good anthem with the euphoric “Spread Love.” Foster The people returns with the similarly upbeat “Doing It For The Money,” which is the indie-pop band’s best track since “Pumped Up Kicks.” Last but not least is The Vamps. I didn’t have much time for their early pop/rock tracks, but I’m onboard since they embraced electronica. They dish up a dub-step drenched tune called “Middle Of The Night,” which was produced by “Solo Dance” DJ Martin Jensen. Listen to it in my playlist below.