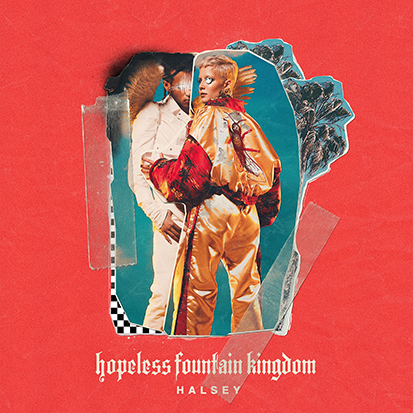 One of the surprises on Halsey’s hopeless fountain kingdom tracklist is a duet with Lauren Jauregui called “Strangers.” The 22-year-old opened up about the track during an interview with Zach Sang, describing it as same sex love song. “I was thinking to myself, if I want this song to be believable, it needs to be real,” the “Now Or Never” singer revealed. “So I’m not going to put a girl on the song to sing who’s straight. I’m just not going to do it. So I reached out to Lauren and she came in and she cut the vocal and it sounds awesome.”

“Our voices sound really cool together because we both have really raspy voices,” she continues. “Mine’s a little more delicate than hers. Hers is like really powerful and big and raspy, and mine is kind of like light and raspy. But it’s really cool.” This is when she explains what the song is about and why it’s important. “I just love that Lauren and I are two women who have a mainstream pop presence doing a love song for the LGBT community,” Halsey says. “It’s unheard of. It’s very rare to see it from a female perspective.”

“Troye Sivan is a really good friend of mine, I love him,” the hitmaker elaborates. “I think that his presence in pop culture is so necessary, so vital. Sam Smith obviously made waves making records that people… records that were so human and so amazing and emotional that it didn’t matter what your sexuality was, you just identified with what he was singing, you know. And that’s kind of what I wanted to do with ‘Strangers’… at no point in the song does it make a point to say that it’s a gay love song. It’s just a love song that happens to use same sex pronouns.”

Halsey talking about a song from her album, 'Strangers' with Lauren Jauregui. pic.twitter.com/vHbk9Y7kJK

Are you excited for the duet? Let us know below, or by hitting us up on Facebook and Twitter!