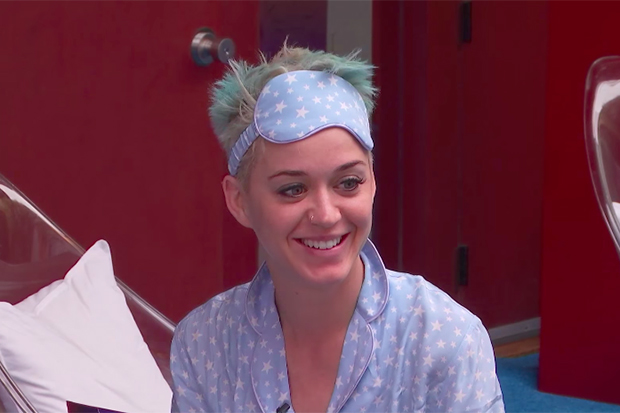 In case you’ve been in coma or stranded on a deserted island without wi-fi, Katy Perry has spent the past four days broadcasting her life to the entire world via an exclusive partnership with YouTube. The pop star’s Witness World Worldwide livestream ran for 96 hours and provided a stream of viral moments including a gut-wrenching therapy session, charades with RuPaul and a cameo by Left Shark. (We round-up the highlights here). She concluded the promo marathon this afternoon (June 12) with a concert for 1,000 fans at the Ramon C. Cortines School of Visual and Performing Arts in Los Angeles.

After being bottled up in a Big Brother-style house, Katy was clearly happy to soak up the sun and interact with the outside world again. She took the stage in a sequined pantsuit and immediately launched into a reworked version of “Chained To The Rhythm.” That was followed by Witness LP highlight “Hey Hey Hey,” which got immediate fan approval (judging by the screams) and passed the ultimate test by holding its ground against the next song, enduring classic “Teenage Dream.” That song hasn’t lost any of its luster, which can also be said of “Firework,” “Dark Horse” and “ET.”

After a quartet of chart-toppers, the 32-year-old returned her focus to Witness. Katy, somewhat surprisingly, treated fans to the first live performance of ballad “Save As Draft.” (It was unexpected because “Miss You More” is slow jam generating all the heat online). That was followed by the sublime, house-y title track, which sounds like a smash, and underrated single “Bon Appetit.” The sexy, double entendre-filled bop didn’t quite connect with the general public, but the faithful knew every single, tongue-in-cheek word.

As warmly as that song was received, “Swish Swish” got the rowdiest reception of the day. Fans shouted every, shady word and dance move. Speaking of which, the choreography resulted in a costume malfunction when the diva’s pants split. The song is a lot more digestible (and feels less pointed) without Nicki Minaj’s rap, so I hope there’s a solo version at some point. Next up was “Power” — one of the album’s more obscure, new age-y moments. It sounds great on the record, but doesn’t quite translate as well to the live arena.

Not that Katy was about to end on a low. She thanked everyone for being part of her game-changing Witness World Wide experiment and expressed her gratitude to fans. The hitmaker also promised to reciprocate their love and devotion. It only made sense to close with ultimate feel-good anthem “Roar,” which was mixed with “Hard Knock Life.” All that was left was for Katy to pull the plug (there was literally a giant one on stage) on her livestream and gracefully depart this real-life Truman Show. At least, for now.

Swish Swish! @katyperry wound up her livestream with a cute concert for fans in a local school #kpwww #witness

96 hrs of non-stop promo comes to an end. No wonder @katyperry wants a nap! #kpwww #witness 👁

Did you love Katy’s livestream? Let us know below, or by hitting us up on Facebook and Twitter!