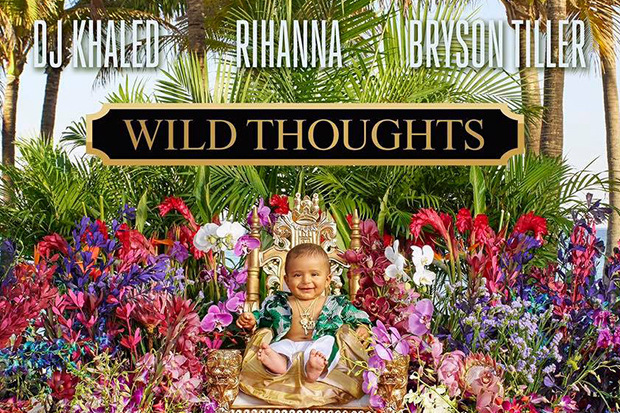 It's official. DJ Khaled teams up with Rihanna and Bryson Tiller on "Wild Thoughts."
MORE >>

Just yesterday (June 15), DJ Khaled announced the title and revealed the cover art of “Wild Thoughts” — his rumored collaboration with Rihanna and Bryson Tiller. The video arrived this morning and it’s a sizzling, summery blockbuster. Calling a RiRi video hot is pretty much a given, but this one has actual fireworks! It’s a sultry ode to hazy summer nights and street dance parties that are perfectly timed for the start of the season.

The song itself samples Santana’s 2000 hit “Maria Maria,” giving it a Latin flair that suits the exotic video. In the clip, Rihanna is showcased front and center, but she also hangs with Khaled and Bryson — parting with the crowd at a sweaty fiesta. The hitmaker also gets some much-deserved solo time, cooling off in front of a fan in a bedroom, all while writhing around on the bed. Bryson joins halfway through for his verse, and the trio link up at the end to dance with a fireworks show overhead. Watch up top.