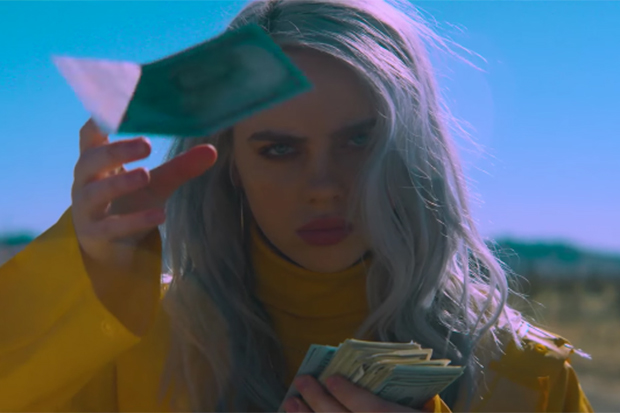 The buzz around Billie Eilish will only get louder with the arrival of 'Bellyache.'
MORE >>

Billie Eilish contributed one of the few original tracks to the 13 Reasons Why soundtrack. And “Bored,” a lilting mid-tempo about emotional inertia, stands toe-to-toe with the eclectic mix of vintage bops and indie gems. She drops a Miles & AJ-directed visual arrives today (June 26) and it’s a suitably solemn affair. “The video was inspired by being trapped in a relationship that was going nowhere,” the 15-year-old reveals. “In my mind its that when you’re in such a toxic place with someone and you’re treated so badly for such a long time that eventually you’re used to it. It gets boring.”

The video conveys that concept by having Billie perched on a giant ladder in a white room. “I love ladders for some reason and the thought of being on an endless ladder in a kind of timeless/antigravity space also where no rules apply, is just really sick to me, and goes with the concept of the song by getting nowhere in a relationship, and getting bored,” she explains. “Bored” has already racked up more than 7 million Spotify stream and may (or may not) feature on her debut EP, which is imminent. Watch up top.