SUPERFRUIT Did That! Watch The Duo’s Stylish “Imaginary Parties” Video 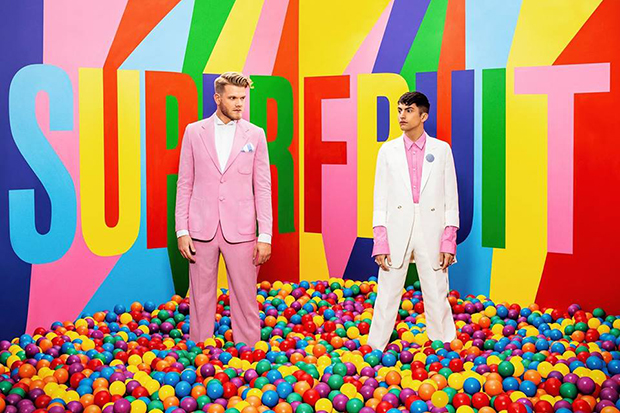 SUPERFRUIT, comprised of two fifths of Pentatonix, is releasing a two-part EP.
MORE >>

Mitch Grassi and Scott Hoying of Pentatonix formed a splinter-group called SUPERFRUIT in late 2016, surprising fans with “Bad 4 Us.” That was a cute bop, but the duo takes it to a whole new level on “Imaginary Parties.” I don’t know what I was expecting from the intro to their two-part debut EP, Future Friends (out today), but it wasn’t a future-bass banger with soulful undertones and a funk-infused chorus. They really go for it, clearly relishing the creative freedom that comes with exploring genres beyond their a cappella fare.

The visual is similarly ambitious. The boys serve serious looks — at one point, Mitch teams platform heels with a baby-pink suit — and strike glamorous poses with their posse of gorgeous dancers. It’s colorful, stylish and super fruity — in other words, completely on brand. Pentatonix fans have no reason to be concerned. The group is touring next month and will, no doubt, drop some kind of festive offering later in the year. Download SUPERFRUIT’s EP here (the second part arrives September 15) and watch their new video up top.