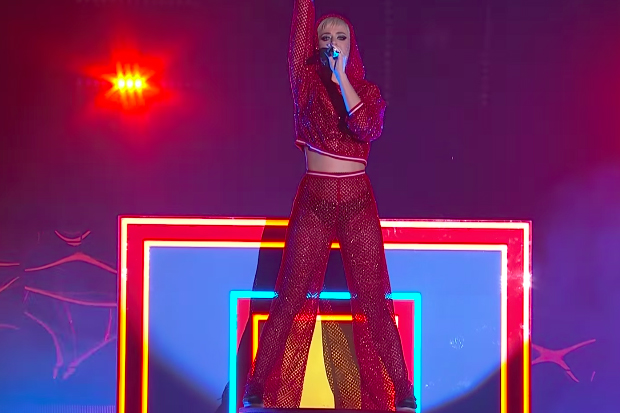 Another one in the basket! Katy performed "Swish Swish" on 'The Voice Australia.'
MORE >>

Finally a lyric video worth watching! As reported yesterday (July 2), Katy Perry’s “Swish Swish” lyric video stars Brazilian gif queen Gretchen. The 58-year-old former pop star, who landed a string of hits in the ’70s and ’80s with songs like “Freak Le Boom Boom” and “Conga Conga Conga,” is now a social media sensation thanks to her exaggerated facial expressions and outrageous behavior — two qualities on full display in her latest endeavor. She serves looks, fashion and choreography in “Swish Swish,” ensuring its destiny of going viral.

It will be interesting to see if the (belated) lyric video means that “Swish Swish” is getting a full rollout with an official visual and high-profile performances. For a while there it looked like Katy was quietly moving on to the next single with “Save As Draft” being sent to adult pop stations. She has also singled out “Hey Hey Hey” during her UK promo tour, perhaps a sign that it’s going to be the next official cut from Witness. In the meantime, there seems to be a lot of life left in “Swish Swish.” Watch up top.