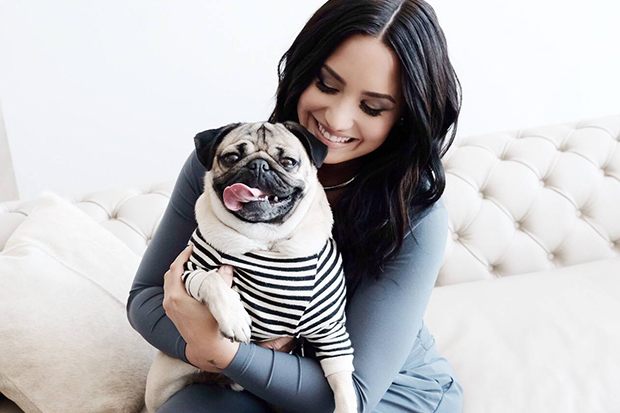 Demi is the Queen of Clubs! She follows up 'No Promises' with another banger.
MORE >>

Baby, she’s the baddest! After teasing the July 11 release of her upcoming single yesterday (July 5), Demi Lovato took things one step further by unveiling its official cover and title. Fans speculated that the release would be called “Sorry Not Sorry,” and it turns out they were (shockingly) right on the money this time around. The “Cool For The Summer” songstress confirmed the unapologetic title and showcased a confident look on the cover, which sees her serving face in front of a cool blue background. Her arms appear to be covered in bubbles, implying that things may be getting seriously sexy and a little damp in the accompanying music video.

The unveiling came alongside an extended teaser of the track. A deep male voice proclaims the hitmaker a bad bitch and the baddest over a chilly beat. Demi is clearly taking no chances this time around and is coming out swinging. This summer Demi has transformed into a bit of a club queen with appearances on two dance anthems alongside Cheat Codes (“No Promises”) and Jax Jones (“Instruction”).

Though “Sorry Not Sorry” sounds like a frosty pop-tinged release, Demi’s upcoming album due for release later this year is said to feature a more soulful sound. It’ll be interesting to see how the new single fits into things. Suddenly July 11 cannot come soon enough! Check out the cover and listen to an extended snippet of “Sorry Not Sorry” below.

Are you excited for the release? Let us know below, or by hitting us up on Facebook and Twitter!