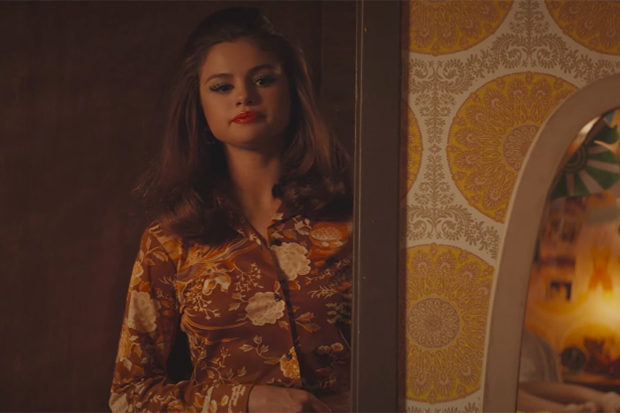 Selena Gomez teases her next single at the end of the 'Bad Liar' video.
MORE >>

Things are about to get very interesting on Stan Twitter. Earlier today (July 6), Demi Lovato confirmed that she was releasing a new single, “Sorry Not Sorry,” on July 11. It’s looking increasingly likely that Selena Gomez will drop “Fetish” on the same day. Of course, the pop star revealed the title of her next single at the end of her ’70s-themed “Bad Liar” video clip. She teased the alt-leaning bop, which was produced by Jonas Jeberg and The Futuristics, on social media today — a sure sign that it’s arrival is imminent.

Selena shared a still from the “Fetish” video (or perhaps just a promo pic), which finds her sitting in the middle of the street in a soft yellow dress. She has a shopping bags next to her and doesn’t seem too concerned that there’s a cloud of smoke behind her. The track, which was co-written with Chloe Angelides, Leland and Gino Barletta, is reportedly The Weeknd’s favorite cut from Sel’s new LP. It will be interesting to see if this is another soft release like “Bad Liar” (minimal promotion, no performances etc.) or a fully-supported rollout.

As for the dueling release dates, it’s probably just a coincidence or canny marketing. There’s no bad blood here. Selena just dropped a Spotify playlist of summery bangers and Demi’s “No Promises” is included along with bops from Miley Cyrus, Katy Perry, Julia Michaels and Alessia Cara.