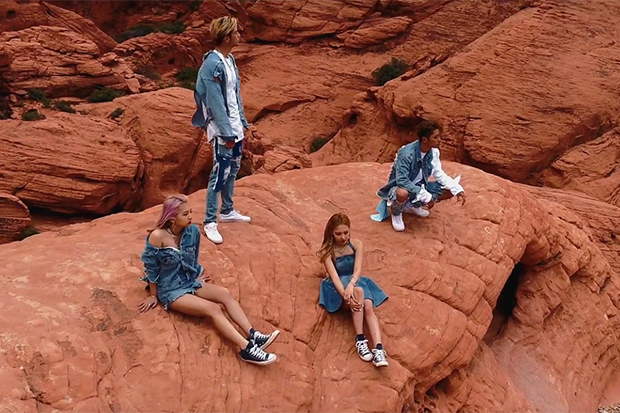 As the trend of empowering K-Pop girl groups was dying down and the dawn of the goody-two-shoes girl groups was rising, Red Velvet emerged in 2014 and positioned itself somewhere within the latter’s realm but with a quirky twist. Coming from one of the biggest entertainment companies in South Korea, home to K-Pop greats like Girls’ Generation and EXO, the odds were stacked in favor of Red Velvet right off the bat.

Without much fanfare leading up to the release, the then four-piece debuted with “Happiness,” a Euro-pop meets African tribal beats jam, and racked up over two million views on YouTube within the first 24 hours. While the prestige of their company and labelmates helped a lot, throughout their short career, Irene, Wendy, Seulgi, Joy, and Yeri have shown they can pull their own weight and bring something fresh into the genre, dropping hit after hit.

The (now) quintet has capitalized on high-energy, zany concepts that’s unrivaled in K-pop at the moment, and has paired it with equally quirky and genre-bending tracks. “Dumb Dumb” is groovy and infectious as hell, not to mention the music video is filled with WTF moments. “Russian Roulette” has a retro 8-bit, synth-pop sound, which compares winning someone’s heart to the lethal game. To contrast their bolder side, Red Velvet has another softer, sultrier one, which they showcase through mostly R&B ballads like “Automatic” and “One Of These Nights” that highlight their vocal chops.

If Girls’ Generation is the eldest sister who is classy and square, and f(x) is the cool, alternative middle sister, Red Velvet is the youngest one who steals the middle sister’s clothes, acts like the eldest, but is still a bit weird. SM Entertainment groups are legendary within the fandom, and with only three years under their belt, Red Velvet is currently one of South Korea’s biggest girl groups and shows no signs of slowing down.

Watch the video for the group’s latest single, “Red Flavor,” below.