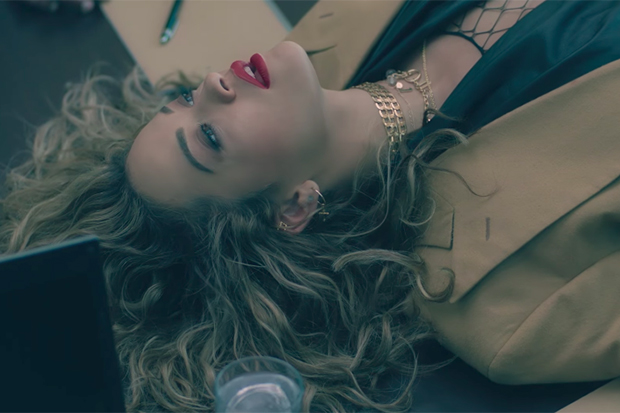 Different! Rita Ora finds love in a corporate place in her offbeat 'Your Song' video.
MORE >>

Rita Ora sat down for a Facebook Live session earlier this week and shared a couple of tidbits about her new album. The most important being that it has a new release date. While nothing was made official, the pop star had previously said that the long-overdue record was coming in November. Well, Rita Bots will have to wait a little longer. “My album will be dropping very soon,” she promised. “I do wanna say the beginning of next year but hey surprises do happen because we have the internet.”

The 26-year-old also listed some new collaborators (Stargate, Chris Martin, Julia Michaels and Justin Tranter) and gave some insight into her new direction. “It’s going to be a more mature Rita, but still fun and crazy and stuff cause I guess that’s me, but I’ve just grown a little bit,” she muses. “It’s a bit more real, a bit more vulnerable, but also it’s a bit more sensitive on top of it all because I finally got in touch with my heart, guys. I finally figured it out and I’ve decided to accept the fact that I have feelings and emotions.”

Are you excited for Rita’s new album? Let us know below, or by hitting us up on Facebook and Twitter!