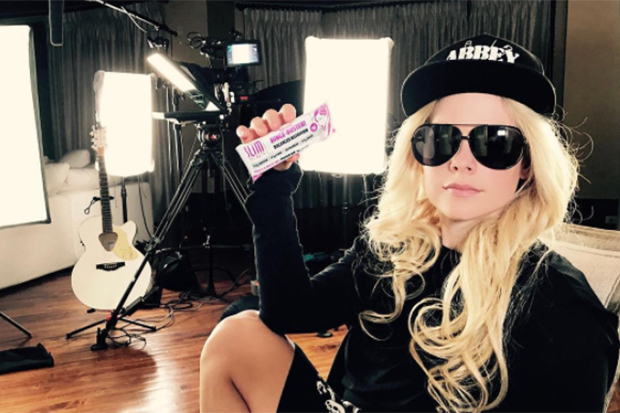 Avril Lavigne hasn't been replaced by a clone and is working on her 6th LP.
MORE >>

Well, here’s some good news for music-starved Avril Lavigne fans. The pop/rocker’s sixth studio album is almost finished and should be released before the end of the year. “Avril is in a really good place right now,” an insider told E! News. “Her recovery [from Lyme disease] has been going well and she’s been getting stronger and stronger. She has more energy and has even been exercising.” As for the new record? “She should be releasing new music by the end of the year,” they revealed. “It’s been a slow process.”

That’s something of an understatement. Four years have passed since the release of her self-titled 5th LP, during which she has gone through a divorce, been bedridden for months at a time and found herself the subject of a crazy conspiracy theory. (Apparently, she died in 2003). However, everything seems to be back on track. “Officially beginning production this week for the album,” the “Complicated” singer captioned an Instagram pic in May. “Almost there. Been pouring my heart and soul into writing these new songs for you guys.”

The Canadian signed a new record deal in March and has been working on new music ever since. “For this album I have a new team behind me and I just signed with BMG,” she revealed. “I’ve been working really hard on the new music and it’s a reflection of my journey over the last few years. At this point in my career and in my life, I just wanted to put fresh energy around me and I feel like I’m having somewhat of a rebirth in my life.” Revisit “Smile” below. It’s all but guaranteed to put one of your face.

Are you excited for Avril’s new album? Let us know below, or by hitting us up on Facebook and Twitter!