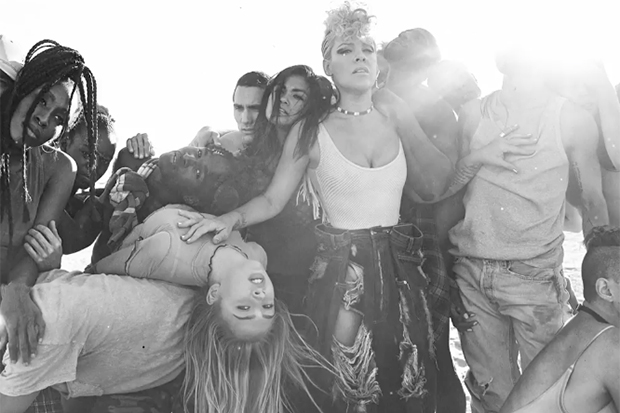 Pink returns with a soaring and timely protest song called 'What About Us.'
MORE >>

After weeks of speculation, it has been revealed that Pink is the official recipient of the Michael Jackson Video Vanguard Award at this year’s MTV VMAs. She will also take the stage to perform at some point during the show, joining a star-studded list of performers that includes Miley Cyrus, host Katy Perry and Shawn Mendes. MTV announced the news today (August 15) with another intergalactic video.

“It’s about being alive and feisty, not sitting down and shutting up even when people would like you to,” the pop rocker said in the video, appearing as a silhouette in front of footage from some of her most iconic videography. The visual featured her 2008 chart-topping hit “So What,” which seems to imply that Pink will bring the song to life onstage later this month.

The news comes fresh off the release of her latest single “What About Us” and the announcement of her forthcoming album Beautiful Trauma. It seems likely that she’ll perform her feisty protest song during the show; however, last year’s recipient Rihanna took the stage several times and performed multiple hits. Hopefully she will have a similar opportunity.

This year, rumors circulated that everyone from Christina Aguilera to Fifth Harmony were set to to receive the award, and out of the mix the “Just Like Fire” hitmaker is the most obvious choice with a collection of hit videos released over the last 17 years. Pink will join the ranks of previous recipients including Justin Timberlake, Britney Spears, Kanye West and Beyonce. Check out MTV’s official announcement below and watch her take the stage on August 27.