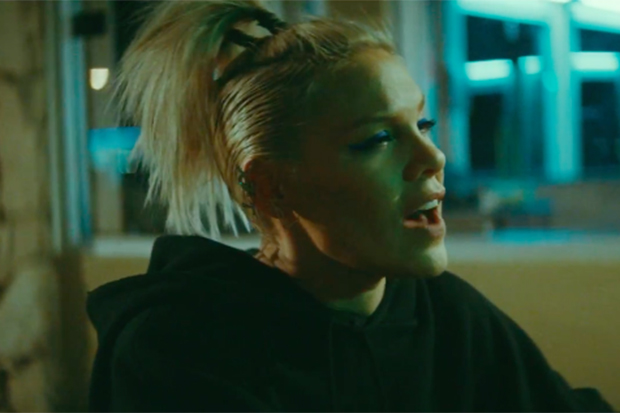 Pink's 'What About Us' video feels like a documentary in light of recent events.
MORE >>

Pink is rolling out a new album called Beautiful Trauma on October 13 and it’s shaping up to be another tour de force if lead single “What About Us” and the cavalcade of A-List collaborators (Max Martin, Shellback, Greg Kurstin, Steve Mac, Julia Michaels and Jack Antonoff) are any indication. While we wait for the opus to arrive, now is as good a time as any to submit her discography to the revisited and ranked treatment. That simply involves ranking her albums from worst to best.

The rankings are always fairly arbitrary, but even more so in this case. I like all of Pink’s albums, so there isn’t a whole lot of difference between first and last place. She is yet to release a dud (I hope that trend continues), but there are a couple of standouts. One from the very early days and one recently. If nothing else, this is a good opportunity to reacquaint yourself with the 27-year-old’s output ahead of her new era. Strap yourself in and get started below.

I feel bad for putting Pink’s latest album in last place, but The Truth About Love doesn’t resonate with me as deeply as the rest of her discography. It felt like the third part of a trilogy that began with I’m Not Dead, only the rowdy pop/rock formula was starting to wear a little thin by 2012. Not that it’s bad by any means. “Try” ranks as one of the pop star’s best ballads, while “Just Give Me A Reason” was a deserving number 1 hit and Song Of The Year Grammy nominee. I just could have done without the faux rebellion of “Slut Like You,” “Walk Of Shame” and “Chaos & Piss.”

Best song: “There You Go”

Pink all but disowned her debut album for a while there (she seems much more fond of it now), but I’ve always had a lot of time for Can’t Take Me Home. Y2K R&B doesn’t get much better than “There You Go,” “You Make Me Sick” and “Most Girls.” In fact, the songs are universally great. But just because you’re good at something doesn’t mean it’s a passion and that obviously applies to Pink and angry hip-hop bops. While it was only a matter of time before her inner-rock star broke out, this album holds up remarkably well.

After veering from R&B to pop/rock on Missundaztood, Pink took it a step further and gave Avril Lavigne a run for her money as the queen of pop/punk with Try This. When I first starting putting together this list, I assumed the hitmaker’s third album would rank a lot higher. But it’s a little thin on signature songs. However, while Try This lacks the killer singles that litter her other records, it is probably her most consistent. The record also boasts lesser known gems like “Save My Life,” “Walk Away” and “Love Song.”

When the hits dried up on Try This, Pink went back to the drawing board and ultimately reverted to the feisty pop/rock formula of Missundaztood on I’m Not Dead. To freshen up her sound, she roped in some of the game’s hottest songwriters and producers (Max Martin, Dr. Luke and Billy Mann). While it took a while to find an audience, I’m Not Dead ultimately delivered 7 hit singles and wrestled the pop/rock crown back from Kelly Clarkson. It also confirmed Pink’s status as a superstar.

Best song: “It’s All Your Fault”

At first I dismissed Funhouse as a by-the-numbers follow-up to I’m Not Dead. It certainly follows the same formula and boasts most of the same collaborators. But like The Empire Strikes Back and The Road Warrior, this sequel is better than the original! Not that you can tell by the singles. While “So What” and “Sober” leave me cold, there is so much depth to this album. My favorite cuts are ballads — namely “It’s All Your Fault,” “I Don’t Believe You” and “Glitter In The Air.” This is the gold standard for modern pop/rock albums.

I can’t think of a more convincing sound and image overhaul than the one Pink went through on Missundaztood. This wasn’t so much a change of direction as a creative rebirth. The hitmaker left R&B behind, baring her soul on uncomfortably honest, genre-hopping bops and ballads. “Get The Party Started” is regarded as a classic with good reason, but few songs tap into teen angst better than “Don’t Let Me Get Me” and “Just Like A Pill.” Even album tracks like “Lonely Girl” and “Numb” are emo-gems.

What’s your favorite Pink album? Let us know below, or by hitting us up on Facebook and Twitter!