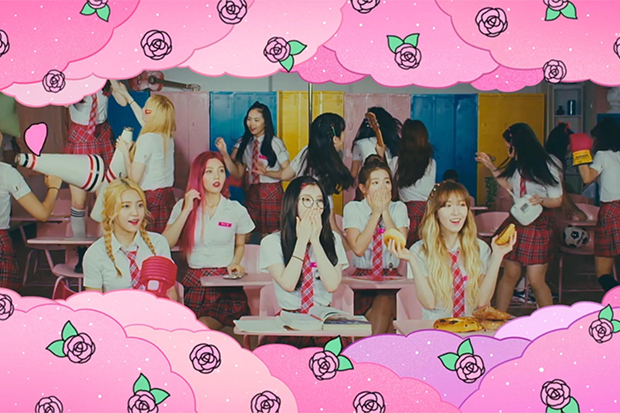 The Wonder Girls disbandment was a tragedy for every K-Pop fan, but on the bright side OG member Sunmi has now returned with her first solo single in three years, “Gashina.” It’s the latest K-Pop song to latch onto the tropical reggaeton trend, which is currently being flogged harder than the RedOne epidemic of 2009. It was produced by YG Entertainment’s in-house hitmaker Teddy (2NE1, BLACKPINK etc), which explains why it’s a little on the generic side. However, it’s also one hell of a banger, and surprisingly much stronger than a lot of official YG releases from this year.

Sunmi’s not the only female soloist back in action, with Idolator fave MiSO returning with her second single, “Pink Lady.” Like “KKPP,” this is another noisy hip-hop stomper with blaring synths and squeaky HyunA-esque rapping. It works well, but it’s best enjoyed with the music video so you can admire MiSO’s iconic pink hair.

Girl group DIA have been ‘inspired’ by a lot of popular girl groups for their music and visual concepts, and their latest single is no exception. The symphonic pop of “Can’t Stop” sounds like a mash-up of Apink, G-Friend, and WJSN, which is actually pretty amazing – it’s like a megamix of all the popular cute girl groups out right now! There’s more variety on their new album Love Generation, like the synthesized funk of “LOOK” and a couple of tropical-house tracks.

The biggest surprise of the week belongs to the messy MOMOLAND, a rookie girl group who are never going to get anywhere but are fortunate enough to have the backing of one of K-Pop’s biggest hitmakers, Duble Sidekick. Their third single, “Freeze,” is stupidly good, with a creepy carnival sample and pounding electro-pop that builds to a huge chorus. It could definitely be a hit in the hands of a bigger artist.

Rising boy band VICTON have been consistently good since debuting late last year, but their latest tune “Unbelievable” is their best yet. Rising hitmakers BEOMxNANG serve bubbly synth-pop with a tropical twist, making “Unbelieveable” a lot more fun and light than some of the darker tropical tracks out right now.

Japanese girl groups usually lean more towards the cute or the quirky, making hip-hop girl groups a bit of a rarity. Trying to change that are BANANALEMON, who serve vocals, swag, and killer choreography on their club-friendly new single “#SorryNotSorry.” Despite the shockingly low budget of their music video, the song’s production is top notch thanks to J-pop hitmaker STY, who’s worked with BoA, Koda Kumi, and Girls’ Generation in the past.

Last but not least is Japanese teenager RIRI, who has been making waves since last year when she landed a major management deal at just 16. Her new single “Rush” sets her up as a Japanese Ariana Grande, pairing her soulful vocals against bubblegum R&B and sugary synths. Check it out below.