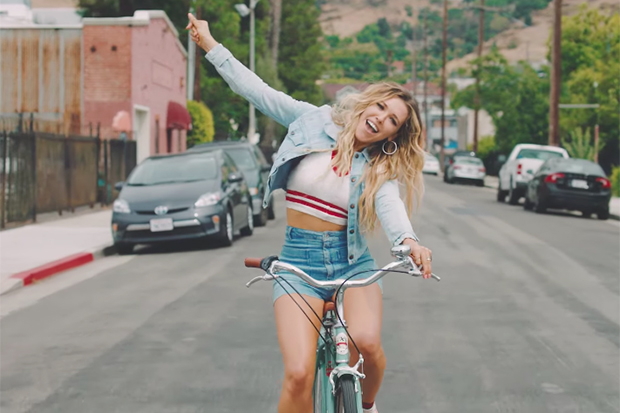 Rachel Platten returned to the pop scene in late August with “Broken Glass,” a breezy, mid-tempo anthem with an important message. The first taste of the “Fight Song” hitmaker’s new album was inspired by the Women’s March, specially by the way that women came together to support each other and work towards a common goal. As such, it’s not surprising that the video is an awesome display of girl-power with the pop star’s crew performing choreography and tricks on bicycles.

I recently spoke with Rachel about her powerful new single and the evolution of her sound from more traditional singer/songwriter fare to bright and bold pop. She emphasized that the album will showcase both ends of that spectrum and opened up about some of the collaborators working on the project. The pop star also talked about her love of cycling and how the success of “Fight Song” gave her a much bigger platform for the new album. Find out more about Rachel’s plans in our Q&A below.

Can you pinpoint the moment or event that inspired “Broken Glass”?

I think this was quite a year for everyone. There was a lot happening. I think everyone felt it, but something pretty special happened for women. Even amongst the often troubling stuff that was going on, we were sticking up for each other and coming together and sharing and not giving in to the pressure to compete with one another. That’s pretty rare, and I felt really inspired by that. I loved marching with millions of women around the world. I was very moved. I felt emotional about it, and my response came through my art. I went to the studio afterwards and just poured it out.

It’s also powerful that the video for “Broken Glass” has a female director and an all-girl cast.

We were looking at a lot of directors, and it wasn’t intentional to have a female director. It wasn’t like I was not reading treatments from male directors. Men are incredible and talented too. But this girl Allie Avital, I loved her work. I came up with this concept, and her treatment of that particular idea was perfect. I loved how she understood it. So it felt really right.

And then, I wanted the video to just be a gang of my bad-ass friends doing things that maybe you don’t usually expect women to do, like stand on their head on a bicycle. I’ve seen men doing tricks on the Venice boardwalk with BMX bikes, but I’ve never seen women do that, so that was pretty incredible for me too. I remember the first time I started seeing them do tricks, my jaw would just hit the floor. I was like, “Can you please continue to lip sync along with the words so we can actually capture you?”

But the day was pretty amazing. There was a moment in the video when the sun started setting and everyone was getting tense. I looked around and realized that if I didn’t go around and meet every single girl and make them feel like they were welcome on set and that they were important, even the extras, who were probably exhausted and boiling hot trying to do these concentric circles over and over again,the vibe could be bad.

So I went around, introduced myself to everybody, gave hugs to everybody, thanked them. And because it was a bunch of women, all of a sudden there was this atmosphere of support and camaraderie and just like, “Hell yeah!” We started cheering and we got the take. It was just really fun. Yeah, it felt really good.

I heard that you’re a bit of a hobby cyclist. Is that true?

I love riding my bike. I am so obsessed with it. I’m constantly trying to ride my bike places, and my husband is always telling me, “Actually, we really don’t have time for that. We have to drive.” I’m like, “Well, we could have time for it if we take …” I just feel like life on a bike is way more fun. I put my speaker in my basket and ride up and down the Santa Monica/Venice coast. I love it. I don’t do tricks, though. Don’t worry.

Do you ever get people scratching their head, wondering why Rachel Platten is cycling past them?

I have never been recognized on a bike. You’re also going really fast… or not really fast, but you’re going faster than walking, so I think if anyone did recognize me, I’d be gone. It would be too late.

What was it like working with Stargate on “Broken Glass”?

If anything, they simplified the production. I think the production was already really special, and my friend Jarrad Rogers had begun it with me. But what Stargate added was a kind of simplification. They made the sound more crisp so that you could focus more on the lyrics. Before, there were these big, bombastic drums in the chorus the whole way through, and the words were getting lost. It felt really good, you could dance to it. But it was really important to me that the words were able to be heard. What Stargate did was understand what needed to shine in the song and allow for it to come out a little bit more. They are so talented and just really gentle, sweet guys.

Is this the only song they worked on?

Well, we’re picking the album as we speak, so I don’t totally know yet what is going to be on it. I mean, I know 99 percent of what’s going to be on it, but I can’t comment on that for sure. I did do a couple other songs with them, so possibly.

Can you talk about some of the other songwriters and producers that you wrote with?

I love talking about this. I actually haven’t been asked about this yet. My favorite subject is songwriting. I’m so glad I can talk more about the fact that I’m a songwriter, that I write all my songs and I write all my lyrics. I think people didn’t necessarily know that I wrote my songs and didn’t even know that I wrote this new single. Maybe it’s surprising some people. So anyway, great question.

I have a collaborator that I love probably more than life itself. His name’s Nate Cyphert and he did 75 percent of the record with me. And Jon Levine, who I did “Fight Song” with, was another huge contributor. Both of them helped me feel like there were no rules, that I was just in a sandbox playing and there were no adults, no one telling us things we couldn’t do. Because of that, my inner artist was just so free and wild.

I also worked with an amazing producer named Jason Evigan. He’s incredible. He brought a soul and spirituality and love, and he just helped me bring out both a darker side, but also a deeper side in the production. So he was instrumental as was another guy called Ian Kirkpatrick, who has totally helped me find this super minimal kind of stripped-down sound that is really exciting. I think that people are going to be very surprised by the songs on the record. I’m really excited for them to hear it.

“Broken Glass” is more pop than a lot of the songs on Wildfire. Is that reflective of the rest of the album?

I think that it is reflective of the sound, but there are lots of different ways that I explored that, the boundary-pushing elements of pop. It isn’t just straight-up EDM four on the floor or dance beats at all. Actually, we messed with instruments and put my voice through a Hammond organ amp and we used vocoders. We kind of just played around a lot, but yes, what came out, I think, does sound more pop.

It’s hard to talk about, because I don’t know exactly what’s going to make the album. I think it will surprise people, but also I think my fans will be really, really happy because it has exactly what Wildfire had in that I’m extremely honest in my lyrics. I went really deep with these emotions, deeper than I ever have. I went to really raw places that were awful scary to talk about and solved a lot of things that were hurting through song, through these songs that were like journal entries to me.

One last thing. Has it finally sunk in? The first time I spoke to you, “Fight Song” was just taking off. The next we spoke, your head was still spinning from the success.

You’re so cute. Oh my God. I don’t know. Sometimes, yes. Sometimes I’m able to just feel so much gratitude for where I’m at. I look around and I’m able to know people are listening this time. I made this record knowing that I have a voice. I have a microphone. I have a platform, and people are going to hear it. That’s incredible. I was afforded that opportunity because of the success of “Fight Song.” But I’m still wrestling with all the demons that I was before, the security and looking for approval and just the fear that I have.

That hasn’t gone away because of success. You think when you achieve these impossible goals that you set for yourself, everything will be good, that you’ll be happy. I was happy in a lot of ways, but I also had a lot of the same things that hurt. The record allowed me to look at that. Why? What’s going on? What did I need to examine still?

Good luck with everything. It was great to talk to you again.

Thank you so much. It was really nice to talk to you again.

Are you excited for Rachel’s new era? Let us know below, or by hitting us up on Facebook and Twitter!