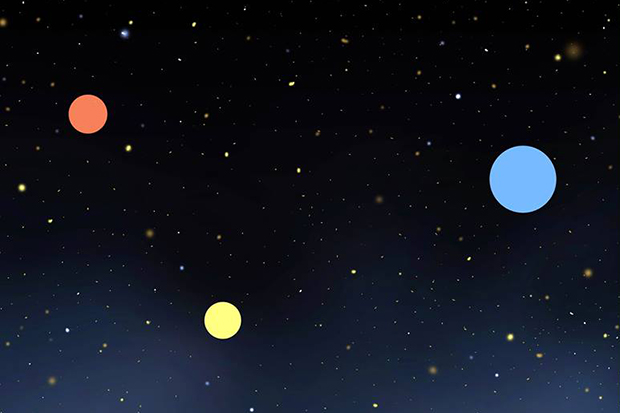 Fridays can be overwhelming for pop fans. Every week you’re bombarded with a glut of new music, which can lead to ear candy falling through the cracks. I’m hoping to circumvent that tragic scenario with The Drop — a cheat sheet (of sorts) to get you through New Music Friday. By now, you have probably heard Kesha and Macklemore’s nostalgic “Good Old Days” and possibly checked out Gwen Stefani and Blake Shelton’s festive duet “You Make It Feel Like Christmas.” But that’s still just the tip of the iceberg.

Let’s start with WALK THE MOON. The Cincinnati band caught lightning in a bottle with 2014 single “Shut Up And Dance,” which peaked at number 4 on the Billboard Hot 100 and sold triple platinum. They deviate from their synth/rock path on “One Foot,” diving deeper into the world of electronica. Happily, the gamble pays off and the uplifting anthem sounds like a hit. The same goes for Jack & Jack’s latest. The duo has come a long way from their Vine days, deftly blending pop and hip-hop on “Beg.” This could be their first big radio song.

Another band making a big impression this week is The Shadowboxers. The trio was discovered by Justin Timberlake after posting a cover of “Pusher Love Girl” online and were ultimately signed to his artist development company, Villa 40. And his fingerprints are all over their debut single. From the old school R&B elements to the falsetto vocals, “Hot Damn!” is giving me serious Justified vibes. Which is obviously a good thing. Another artist taking a note from the JT playbook is Demi Lovato. “Sexy Dirty Love” wouldn’t sound out of place on FutureSex/LoveSounds. Again, a compliment.

Demi isn’t the only Disney diva with a hot new track. Olivia Holt landed her first hit when “History” went viral last year. The dancehall-tinged anthem racked up more than 100 million streams and helped crystallize her sound. She comes back with swinging with “Generous,” a slinky, funk-laced bop produced by Gladius. Another rising star upping the ante this week is Noah Cyrus. The 17-year-old has been a revelation this year, hopping from electro to pop/rock and country without skipping a beat. She veers into the world of alt-pop on “Again,” dragging noise-pop towards the mainstream. Where’s her album?

Another female artist enjoying a breakthrough year is Anne-Marie. She returns with a melodic bop about the end of a relationship. “Heavy” is rich, dripping in hooks and easily the Brit’s best single since “Alarm.” In some ways it picks up where her chart-conquering collaboration with Clean Bandit, “Rockabye,” left off — with emotional dance-pop. ALMA’s new single is equally impressive. The Finnish sensation teams up with French Montana for the feisty and unusually honest “Phases.”

Next up is trans diva Kim Petras. She faced a mini backlash when social media discovered that Dr. Luke produced her music, but it didn’t stop the obscenely catchy “I Don’t Want It At All” from becoming a streaming hit. The German songstress drops two new singles today, “Hillside Boys” and “Hills.” Sounding like a pre-depression Lana Del Rey with lyrics about doing drugs in the Hollywood Hills, the latter gets my vote as the better release. Another act with a Dr. Luke connection is Yelle. The French duo comes through with a dreamy electro-pop anthem called “Romeo.”

I can’t believe I’ve made it this far without writing about a Swede. Let’s fix that right now. Newcomer Rhys scored a surprise hit with summer single “Last Dance” (17.5 million streams and climbing) and the follow-up, “Too Good To Be True,” should get just as warm a reception. Co-written by Max Martin cohort Jorgen Olofsson, this is top-shelf pop with a powerful vocal and warm, layered production. Countrywoman Marlene first appeared on my pop radar with sugary sweet bop “Next To Me.” She now shows off her versatility on soulful, exceedingly pretty mid-tempo ballad, “Miss You A Little.”

Looking for some sweet soul music? Tamar Braxton teases her fifth LP, Bluebird Of Happiness, with old-school R&B anthem “Blind.” The reality star gets a lot of grief online, but she’s a vocal beast and has delivered a string of accomplished albums since reemerging with 2013’s Love And War. If you’re looking for something a little more contemporary, Dej Loaf knocks it out of the park on “Changes.” The rapper showcased her pop sensibility on dreamy earworm “No Fear,” but returns to her rap roots on her new buzz single — only with a brass-heavy, multi-layered soundtrack courtesy of Ricky Reed.

It would be remiss of me not to include a little K-Pop give BTS’ historic week. The biggest boy band in the world made chart history when new LP Love Yourself ‘Her’ topped the iTunes chart in 73 countries. The album was spearheaded by sugary banger “DNA,” which soared all the way to number 4 on US iTunes. Proof that quality pop is universal. Fellow K-Pop heavyweight CL has been working on her US debut for years (long story), but comes out of hiding to contribute “No Better Feelin'” to the surprisingly lit My Little Pony soundtrack. It will do for now.

I’ve been a little preoccupied with female artists this week, the guys held their own. I’ve been a fan of Eli Lieb since “Young Blood” and he continues to churn out well-crafted, heartfelt pop songs. His latest is called “Kissing Your Tattoos,” which explores matters of the heart from a unique angle. Youngr, on the other hand, is at the very beginning of his journey — recent nabbing a deal with Island Records. His major label debut single, “What’s Next,” is a fiery electro-pop statement co-written by Asia Whiteacre. Mark him as One To Watch.

Let’s wind up with a pair of club bangers. It feels like the world could end at any moment, so we might as well go out with bang. DJ Snake returns this week with the follow-up to chart phenomenon “Let Me Love You.” He could experience similar success with “A Different Way,” a supremely catchy floorfiller featuring LAUV. Equally intoxicating is Kygo’s “Stargazing” — an unusually pretty house anthem voiced by Justin Jesso. Check it out in my playlist below.