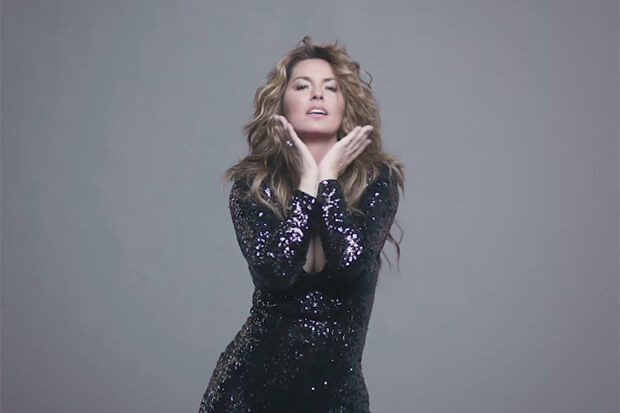 Shania Twain gets it very right on new single 'Swingin' With My Eyes Closed.'
MORE >>

With Now predicted to debut at number one on the Billboard 200, Shania Twain’s fairytale comeback is almost complete. The only thing missing from this era is a hit single and she might just nab one with “Swingin’ With My Eyes Closed.” A bizarre hodgepodge of genres (there’s a bit of dancehall, country and rock) that is pulled together with an atomic chorus and oceans of charm, the album’s second single holds up against any of the pop legend’s classic singles. Let’s just hope radio plays along.

The flawless 52-year-old is going all out with promo, dropping a cute video and performing the song on The Late Late Show With James Corden. Shania rocks a chic, leopardskin-print suit and delivers one of her best vocals since coming back. The country queen is supported by a full band and a trio of backing singers, but it’s the participation of the audience that really makes this come alive. Who could have guessed that the Canadian’s perky brand of country-pop would be the perfect antidote to the misery of 2017? Watch her in action up top.

Did you love Shania’s performance? Let us know below, or by hitting us up on Facebook and Twitter!