Why Don’t We Talk ‘Invitation,’ Performing On TRL & Their One Year Anniversary 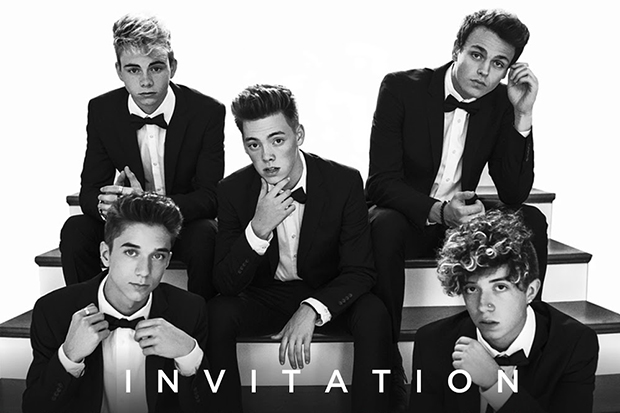 Rising boy band Why Don't We introduce their 'Invitation' EP with the title track.
MORE >>

Music is hurting for a premiere boy band this year, and rising group Why Don’t We are ready to deliver the pop excellence to earn the top spot. Comprised of Daniel Seavey, Corbyn Besson, Jack Avery, Zach Herron and Jonah Marais, they have amassed an impressive following while churning out tightly produced pop confections. The group came close to netting a breakout hit with their infectious bop, “Something Different,” and now they are back on the scene with their latest.

Last month, the group celebrated their first anniversary as a band. They commemorated the accomplishment by unveiling their fourth EP, Invitation, sharing a new song and announcing their biggest North American tour yet. Add in a performance at the recently relaunched TRL, and it is clear that Why Don’t We pulled out all the stops for the important event.

I recently had the opportunity to ask the group some questions about their whirlwind year together and their latest EP. The boys talked about their favorite song on the project and what it was like on the set of the music video for “Invitation.” They also revealed a dream collaboration, shared some must-have items that they will bring along when they hit the road next year and revealed where they would like to be in five years. Get to know Why Don’t We a little better in our Q&A below!

You all just celebrated your one-year anniversary as a group by dropping a new EP for your fans. How did you mark the event as a group?

Daniel: We invited a ton of our amazing fans out to the band house where everything started in LA, as well as anyone on our team that has made this last year such a dream come true for us. We sang songs, gave many thank you’s and hugs, and ate tons of cake. It doesn’t get much better than that night.

Speaking of Invitation, do you guys have a favorite song on the EP?

Daniel: My favorite song is “Turn It Off,” but it was hard choosing a favorite. This whole EP is such a vibe, you really have to go through the thing as a whole.

What inspired the sonic direction of this release?

Daniel: Invitation is the fourth and last EP we released in our first year of being a band, so we really took our time with the sound and quality of this EP! With each EP, you can notice more and more growth of us as a band and our sound. This one seemed to really stand out in how in-depth our sound became. We took some strong influences from the ’90s, combined it with what we love in today’s music, and started experimenting a ton. We took a lot of chances with this EP, sonically and lyrically, and we’re all really proud of how it came out.

You also recently dropped the “Invitation” music video. What was the shooting experience like for that?

Corbyn: Shooting the “Invitation” music video was amazing! There were so many hilarious moments throughout the shoot because the video is pretty comical. We got to wear these crazy retro outfits because the video is based in the 90s, and it was cool to act like we were actually in a different time period!

You just performed on the new edition of TRL. In its original run, the show featured iconic performances from some of the biggest stars of the time. Is there one performance from the show that inspired you as a group? Also, what was it like being involved with such an iconic show?

Corbyn: It was really really cool! I was very young when the show was originally airing so I don’t remember too much about it, but my parents were freaking out when we got word that we were gonna perform because they used to watch it all the time! It was an honor to be able to be part of such an anticipated comeback!

As a group, you have released a handful of EPs over the last year. Is there a full-length project in the works moving forward?

Jack: Well, as we always say, it’s classified information! Ha Ha. On a real note though, we are always working on our craft and we love dropping music and surprising our fans! Be on the lookout for new things!

Are there any dream collaborations in your future?

Jack: I can speak on behalf of all of us in the group when I say that collaborating with Ed Sheeran would be a dream come true! He’s inspired us in so many ways with his writing skills and his amazing passion for music.

You just announced that you are embarking on your biggest tour to date next February. How are you getting ready for the show?

Jack: We are all super excited for this upcoming tour! We have plenty of new songs and more creative things being added to our performance so we can’t wait!

What is your favorite thing about being on the road?

Zach: Being on the road is a crazy thing! One of my favorite things is getting to experience the world and getting to do it with my 4 brothers. So many things happen on the road, we meet so many people and see so much of the world. It’s amazing.

Are there any things that you need to have with you while you’re traveling?

Zach: Of course! I always bring a guitar #1, because whenever we’re feeling inspired and in a writing mood we pull out the guitar and write some songs! Another thing I always bring with me is my Saint Christopher necklace my mom got me. It always makes me feel safe while traveling.

In the last year, you have accomplished so much including high profile performances and a collaboration with Logan Paul. Are there any moments that stick out for you as favorites?

Jonah: Yes for sure! One of my favorite moments was hearing our song on the radio for the first time! We were all in the car together and I got a little teary-eyed. Another big moment was performing on TRL!  I just had the happiest, most excited feeling in my stomach while performing. Nothing beats that rush.

Where do you see yourself 5 years from now?

Jonah: In 5 years I hope to still be making music every day with my friends and traveling the world! Only God knows what could be happening then. With our fans, the opportunities are endless.

Do you love “Invitation?” Let us know below, or by hitting us up on Facebook and Twitter!