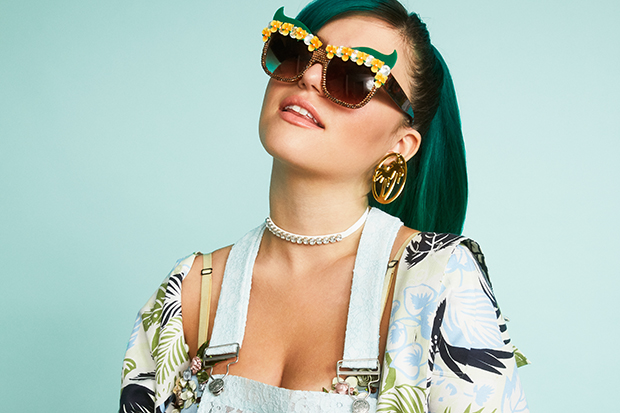 Phoebe Ryan’s blockbuster 2017 culminates with the release of James — a concept EP that documents the various stages of a relationship. From a prickly bop about bad communicators (“Be Real”) to the most relatable breakup anthem in recent memory (“Forgetting All About You”), she examines matters of the heart with rare honesty and a razor-sharp wit. Each song leads effortlessly into the next, which is no easy feat considering that they explore wildly different sounds.

I recently spoke to the “Dark Side” singer about the EP (her ex-boyfriend is cool with it) and songwriting sessions for other artists. Phoebe also opened up about writing “Man On The Moon” for Britney Spears’ Glory album and talked about her passion for birdwatching, among other hobbies that keep her sane. The indie-pop star told me that she has more than enough songs for an album and is ready to put it all together. Get to know Phoebe a little better in our Q&A below.

Was it always the plan to write an EP that documents the different stages of a relationship?

No, it didn’t start out that way. We had this collection of songs and we were like, “Okay, these are definitely the ones that we want to be putting out.” And then we were like, “Oh my God, wait! This tells the story perfectly from beginning to end, this is exactly what happened.” So we got rid of a song or two and moved some things around and we just tried to make it that way because we thought that was just going to be the most interesting way to tell the story.

Do you get nervous about putting so much of yourself out there?

I don’t know. I feel like, yes and no. There’s definitely… if I’m playing certain songs in front of my parents, I will be blushing. But I’m not scared for people to know who I am in a lot of ways.

How does your ex-boyfriend feel about the EP?

I think “Be Real” is the most universal song on the EP. Everybody knows that feeling.

That song started in an interesting way. I just remember being in the studio with two of my closest friends, Nate Campany and Kyle Shearer, producing and co-writing it with me. Before we even started the song, I was just telling them about how my life was going. I was just so hung up about this situation. When you’re working with people that you’re close with and that understand your mind so intimately, songs like that happen. Songs that are just really straight forward, to the point. It came about in a really natural way.

Would you describe it as a pre-breakup anthem?

That’s funny, I guess I never thought of it that way. Honestly, at this point in my life, I think if you do have to ask somebody, “What’s the deal? Do you love me, or do you not? Tell me.” I think that you already know the answer and ultimately you’re going to break up in the end because you should be “hell yes!” about somebody or “hell no!” about somebody. And that’s what I’ve come to learn post James EP. Phoebe will tell you that you should put your heart 110 percent into something and into somebody that is 110 percent about you too.

You should start a love advice column.

Oh, well that would be very interesting. That would be another thing for my parents to blush about.

Did you draw all the artwork for the EP?

Yeah, I’ve been doing all the artwork, all the animation and everything myself. Which has been really fun and really weird.

Have you always drawn pictures on the side?

It’s funny. I took a break from writing for a little while. And it just happened that I picked up drawing and animation as just a hobby because I had been writing so much that I didn’t know what else I was useful for in the world. So, I stopped writing for a minute, and I picked up hobbies. I was doing birdwatching, I got really good at bowling, and then all of a sudden I just picked up a pen and paper and started drawing. And I got an animation app on my iPad.

Sorry, but where does one bird watch in L.A.?

That’s amazing. I also love the Blackbear collaboration. How did that come about?

I was at this writing camp last year in Finland, and I became really fast, close friends with these dudes, Joe and Jason, who write together as Whiskey Water. And they’re best friends with Blackbear. They’ve been friends with him for years. And I wrote “Forgetting All About You” with Whiskey Water, and it just so happened we got Bear on it and it had nothing to do with them. It was Columbia. But since then, Bear and I have become good friends, and he’s really smart and really interesting. He’s just savvy. I think people underestimate his savviness.

Tell me about the “James Has Changed” performance video?

I was trying to just get outside the box in a way, but also doing videos like that are what I grew up doing in college. My band would always do live videos and I really felt like it was a way to just get back to the roots of who I am. I love preforming, and I love doing quirky things like having a twelve piece orchestra. I love that shit. And I’m trying to get back to things that inspire me. Whether it’s birdwatching or orchestras or whatever the fuck else.

One of the things I love about your music is that no two tracks sound alike. Will you ever hone in one one sound?

It’s funny because I think that part of my sound and part of my vibe is that I love to do it all. I don’t know… that’s an interesting question. If somebody wants an album of me singing over an orchestra, I’ll do that. For sure. But, I think it’s way more interesting when artists are … the only through line of the project is their voice and their expressions and their words. I think that the music around it should always be something exciting and different. And maybe not always the same thing. I don’t know.

Have you had a chance to write for any other artists lately?

I have just been focusing on myself for the moment. I did have a fun time this summer. I went to Miami to work with Becky G for a little while, and she’s literally my favorite artist who the world really needs to hear about. She’s unreal. Yeah, I was down in Miami working on her new stuff and that’s pretty much it. I’m just doing stuff I’m passionate about.

Well that’s the thing, her songs are so wildly successful in Spanish and I just think that there’s going to be one song that’ll take her to the top of the world. You know what I mean? And I think that it could be maybe one of those “Despacito” kind of songs where it’s a little bit of both. All I know is she has enough talent to do it, it’s just like who’s going to write the right song for her?

I have to ask you about Britney’s “Man On The Moon,” which was one of the best songs on Glory.

It was the best song, thank you! I know it’s the best!

They slept on it.

They slept on it, you want to know why? It was just too dang good, they didn’t know what to do with it. It’s too dang good.

I agree! How did that song come about?

You know what’s crazy? I was at a writing camp in a castle in France. In the south of France, literally living a castle for a few weeks. And it was the last day we were there. My team and I felt a lot of pressure to do something crazy, and we were like, “Alright, fuck it, lets just have fun and do something wild.” And then we did that song, and we were like, “Okay, a solid way to end the trip guys. Good job!” We didn’t know what was going to happen to this song after that.

We were just pretty stoked that it was undoubtedly an amazing song. But I guess a few months later, we got word that Britney loved it and she wanted to put it on her record. And I just, I peaked. That was it. I peaked.

What do you do when you hear Britney singing your song?

I think they got the singles all wrong on that project.

Thank you. Thank you very much.

Are you happier doing more commercial songs like The Chainsmokers collaboration or indie fare?

It’s so interesting just thinking about the last question you asked about the sound, all the different vibes I’m going for. I feel like since I began doing music, I have always just been so inspired by all different kinds. In college, I was in a folk band for three years. I was in a punk/screamo band, I was all over the place. I feel like I’m good at just being a little bit of a chameleon in a way. And I don’t think that’s a bad thing. Really at the end of the day it just comes down to the vocal. That’s literally it.

It comes down to the songwriting and the vocal and it being good. It just all has to come together. Whether it’s a Chainsmokers song, whether you’re singing a Bob Dylan cover. I love the songs.

This is a bit brutal seeing as you just dropped an EP, but how far off is the album?

That’s not brutal at all. Because as soon as the EP drops, like that day I feel like I have post partum depression. I feel like I gave birth, and I was already crying and sad. I’m ready for an album, let’s go. It needs to happen. The James EP is wonderful, but I’m ready.

Will it be a Phoebe Ryan greatest hits with various songs you have already released or new stuff?

Honestly, it’s so crazy because I feel like I’m sitting on a mountain of songs that are just so fucking good. I feel like if I revisited them and kind of did some tweaking and really not much though, I honestly feel like I’m just sitting on it right now. It’s just about getting everything together. Yeah, there might be a few things added here or there, but really the whole body of work I have been doing the past three years. It’s all there.

I know you’re currently on the road. What’s the best and worst thing about touring?

My favorite thing about touring is I get to sleep as much as I want and nobody bothers me. I can sleep all day long. I think that’s just really great. It’s just very relaxing when I have downtime, I’m just sleeping and that’s kind of awesome. And I guess that’s one of my favorite things and the other thing is being around my band. They’re some of my best friends and so being on tour with them is kind of like summer camp, which is really fun. And my least favorite thing about touring is… I don’t know, I get homesick. I miss my parakeet. I miss my friends. You know, the usual.

Good luck with the EP and birdwatching. Bye!

Thank you very much! Bye!

How did you discover Phoebe’s music? Let us know below, or by hitting us up on Facebook and Twitter!