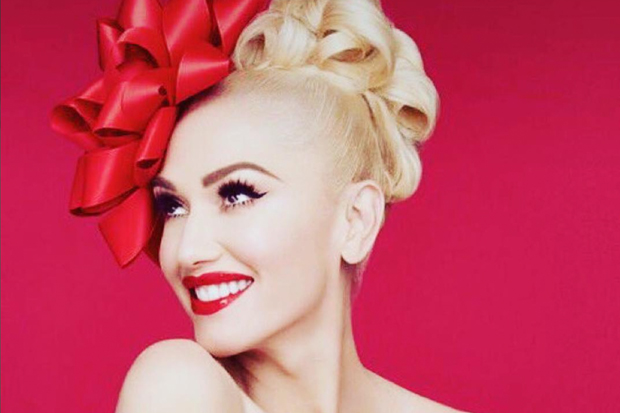 Gwen will perform songs from her Xmas album during an hour-long NBC special.
MORE >>

With Christmas just around the corner, it’s time to get festive. And what better way to brighten your spirits than by listening to a little holiday music? The classic standards are always a treat, but they are even better when they are reimagined by your favorite divas.

This year alone we were treated to a slew of seasonal offerings from some our favorite hitmakers. Mariah Carey, the certified queen of the Christmas, unleashed not one but two festive bops. She contributed the title track to the soundtrack for The Star and got more than a little merry on “Lil Snowman.” But the legendary diva was not the only one to participate in the jolliest time of the year.

Gwen Stefani teamed up with her man, Blake Shelton, for the rollicking “You Make It Feel Like Christmas.” Sia took the season to the tropics with her festive bop “Santa’s Coming For Us.” Shania Twain got a little romantic with Nick Jonas for “Say All You Want For Christmas,” and the ladies of Fifth Harmony unleashed their first original standard, “Can You See.” Just last week Ellie Goulding joined the fray with a lush rendition of the seminal “O Holy Night.”

After familiarizing yourself with some of the new holiday anthems we have received this year revisit some standing classics from our favorite pop sirens below!

Any list of Christmas anthems simply has to begin with Mimi’s defining opus, “All I Want For Christmas Is You.” The euphoric pop song has dominated the holiday charts every year since it was first released in 1994, and this year is no different. The undeniable hit is already sitting just outside the top 20 on the Billboard Hot 100 and is ready to soar even higher. The equally iconic Celine Dion has also conquered the market, and her 1998 take on John Lennon’s “Happy Xmas (War Is Over)” remains as lovely and hopeful as ever. As does Whitney Houston’s rendition of “Do You Hear What I Hear.” The Gospel-inspired anthem soars to glorious heights, and it is the perfect contrast to Madonna’s irresistibly coy “Santa Baby.” No one manages the seductive standard with the same ease as the Queen of Pop.

Following in the footsteps of the Elusive Chanteuse and her peers, countless pop princesses have joined in on making the yuletide bright. Britney Spears found a hit with her original anthem, “My Only Wish This Year.” The saccharine sweet tune is her only official foray into the season; however, it is a beloved addition to her discography. Christina Aguilera delivers tender season’s greetings on “Have Yourself a Merry Little Christmas,” and Jessica Simpson teamed up with her sister Ashlee to beat their drums along to “The Little Drummer Boy.” Beyonce also got in on the magic, delivering a lush rendition of “Silent Night” alongside her Destiny’s Child sisters and releasing an eternally angelic reimagining of “Ave Marie.” Who would have thought the glorious ballad could sound more beautiful?

The trend continued into the new millennium as a new batch of hitmakers decked the halls. Kelly Clarkson sang of finding her one true love wrapped up and waiting for her Christmas morning on the buoyant “Underneath the Tree.” Lady Gaga puts a decidedly different spin on things over sexy beats on her fantastically raunchy “Christmas Tree.” Aussie goddess Kylie Minogue played in a dazzling winter wonderland on “Every Day’s Like Christmas.” Her sweet voice twinkles over a dazzling pop production, and the celebratory track finds seasonal magic every day of the year. In comparison, Katy Perry’s “White Christmas” resonates with a stark sense of hope and nostalgia. After all, who does not join in on yearning for a snowy Xmas morning?

Original Christmas material is always risky, but Ariana Grande struck gold with her hopeful “Santa Tell Me.” The pint-sized diva prays for a relationship that will last longer than a year over an effervescent production. The addition of a tolling bell puts a holiday spin on Little Mix’s “Love Me Like You.” The girl group delivered a playful anthem, and the remixed version is even more endearing. Similarly, Demi Lovato and Miley Cyrus breathed new life into Christmas with remixes of their own. The Tell Me You Love Me siren showcased her stunning voice on a cover of “I’ll Be Home For Christmas” while the Younger Now diva put a twangy spin on “Rockin’ Around The Christmas Tree.” Simply iconic, y’all.

A foray into holiday music is not exclusive to reigning pop royalty. Over the years a slew of our most beloved up-and-comers have also joined in on the festivities. This year the highest honors go to Zara Larsson for revisiting the classic ballad “Mary, Did You Know?” for The Star, but in the last few years Bonnie McKee, Tori Kelly, Carly Rae Jepsen and Meghan Trainor have also showcased their ingenuity with joyful tracks of their own.

Bonnie penned herself a cinematic romp with “California Winter.” On it, she and a lover heat up the holidays in the most joyful of ways. Tori teamed up with a cappella powerhouses Pentatonix for a brilliant medley of “Winter Wonderland” and “Don’t Worry Be Happy,” while the “Me Too” diva promised to be by her lover’s side on “I’ll Be Home.” However, underrated pop darling Carly Rae will always steal the show with her massive rendition of WHAM!’s “Last Christmas.” The “Run Away With Me” singer knows her way around pop hooks, and the wistful release soars to new levels in her hands.

Listen to all of the holiday classics in the playlist below.

Which diva has unleashed your favorite holiday anthem? Let us know below, or by hitting us up on Facebook and Twitter!