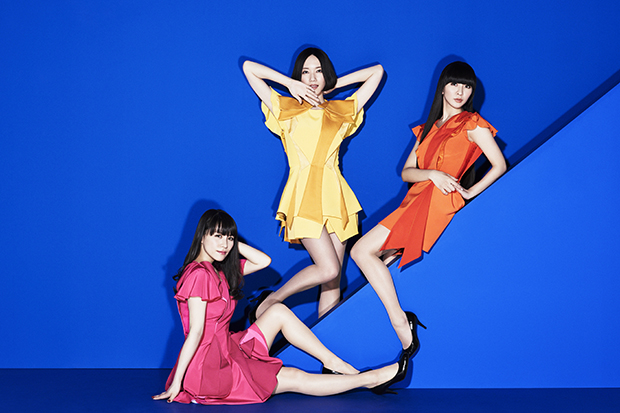 Perfume is one of Japan’s longest-running girl groups & still the biggest.
MORE >>

Girl groups tend to have a short shelf life, but Japan’s Perfume have been entertaining the masses for more than a decade. The trio’s razor-sharp choreography and twinkly techno sound has taken them to the top of the Japanese charts and also made them one of the few J-Pop acts to break through internationally.

Their latest album, Future Pop, is a tight, 12-track collection comprised of the distinctive Yasutaka Nakata-produced electro-pop songs that made them famous, albeit with more Western EDM influences this time around to make Perfume’s sound truly global.

Following Future Pop’s chart-topping debut in Japan, Idolator spoke to the J-Pop trio about everything from their international expansion to their unchanging hairstyles and of course, their favorite perfumes. Get to know one of Asia’s biggest girl groups a little better in our Q&A below.

Congratulations on your new album, it’s one of your best. After being in the industry for 12 years now and being so successful, do you feel pressure to remain number one?

a-chan: No pressure. We don’t see ourselves at the top. We see so many more people above us. What we do is very unique and don’t overlap with other artists. We also don’t admire and try to be like a particular artist. So there is no limit to what we can do and how far we can go!

Perfume are known as one of the most successful Japanese artists internationally. Has this affected the way you make music now? Do you make albums with English listeners in mind?

KASHIYUKA: We don’t write our own music but I feel that our producer Nakata does have that in mind, at least a bit. When we tour abroad, we try to localize and make the setlist and show more enjoyable for the local fans, like sing in English or try to pick songs with more English lyrics.

For a long time Perfume were the only Japanese girl group known in the West, but now groups like Babymetal and Maison Book Girl are promoting overseas too. Do you feel like J-Pop is becoming more known internationally now?

a-chan: I didn’t think Perfume were the only Japanese girl group known in the West…

KASHIYUKA: I thought that more artists were known through Japanese “Kawaii” culture in the West.

a-chan: Like anime singers and Kyary Pamyu Pamyu. It’s hard to believe that we were known before that. From what I hear from the news in Japan, there are more artists performing abroad at anime festivals or participating at Asian music festivals now so it seems like the idea of going abroad has become easier. However, we can and should do more. There are more artists here who wants their music to be heard outside of Japan and there seems to be more audience abroad who are open to our music.

You worked with Yasutaka Nakata again on Future Pop. Will there ever come a day when you work with different producers, or is there no Perfume without Yasutaka Nakata?

NOCCHi: For now, it’s “No Nakata, No Perfume” but I think there are lots of unexpected things waiting for us in the future. Even when the unexpected happens, I think we are ready to have fun with it so we might be able to find new Perfume with a different producer.

Do you ever think about doing solo projects?

KASHIYUKA: Not with music but our hobbies and interests are so different that we try to do solo activities around that, hoping that we can learn from those solo activities and bring that back to the group and contribute in that way. a-chan has a radio show and I have a regular page on a magazine. Waiting for NOCCHi to start something next.

You’ve been around so long now that there are now newer artists, like the girl group Callme, that are clearly inspired by Perfume. Do you feel like it’s copying, or do you take it as a compliment?

NOCCHi: I think it’s a compliment. We, along with our video directors and stylists, put so much thoughts and effort into the project to make something cool so if there are artists out there who feels the same and copy us, that’s flattering.

Is it frustrating not being able to change your hairstyles after all these years? What other hairstyles do you want to try?

NOCCHi: I’m lazy so this hairstyle is the easiest. Short hair is easy. I think I would shave them off if I could. [laughs].

a-chan: I never thought about changing this hairstyle so I can’t imagine myself in any other style.

KASHIYUKA: I wouldn’t call it a frustration but on hot days like at summer festivals, my hair is so long and I have so much hair so I feel more heat and I tend to sweat more than others. That is a problem. I made it a rule not to put my hair up when I perform. If I could try some other style, I would try short hair. I want to know how light my head will become and how much time I can cut drying my hair. My head has always been heavy.

One of your fans wanted me to ask you all what your favorite perfume is!

NOCCHi: I’m actually looking for one now. Something sweet like vanilla or caramel. I want to try one that smells like dessert.

KASHIYUKA: I like perfume by Miu Miu. Pink one called L’Eau Rosee.

a-chan: I like the red one by Hermes. Eau de rhubarbe ecarlate. It might be cologne, not perfume.

And lastly, are there any Japanese artists that you can recommend our readers to check out?

a-chan: There are so many I like but I recommend Chatmonchy. Too bad they’ve split up.

Thank you so much for your time!

All: Thank you for the interview!

How did you discover Perfume’s music? Let us know below, or by hitting us up on Facebook and Twitter!