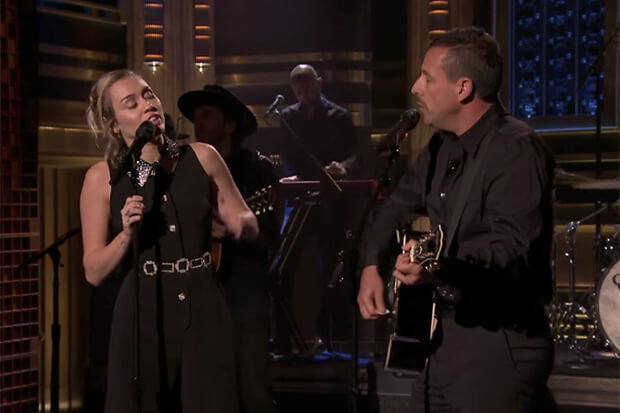 Miley covered Dido's 'No Freedom' with a little help from... Adam Sandler.
MORE >>

And she’s back! Dido, the easy listening queen who brought us “Thank You” and “White Flag,” is releasing a new album called Still On My Mind. The Brit’s much-anticipated 5th LP drops on March 8, 2019 and was produced by long-time collaborator (and brother) Rollo. “It was simple, I only wanted to make another album if it was with him,” she reveals. “It was made in such an easy way, all the vocals recorded on the sofa, a lot of it recorded at home.” The first taste of the project arrived today (November 12) and it’s very promising.

“Hurricanes” finds the sweet spot between Dido’s minimalist folk-pop sound and Rollo’s mastery of electronica. The song begins sparsely with the 46-year-old opening her heart to a lover. “Let me face the sound and fury, let me face hurricanes,” she whispers. “I wanna see you as you walk through the door and time will make us, some ways less and some ways more.” The tranquility is then interrupted by a rush of synths, which takes the dreamy anthem in a whole new direction. It’s still quintessentially Dido, but a little bolder and more daring.

“I wanted to capture the feeling I still get from listening to music, just that rush like you don’t need anything more than this,” the hitmaker says of her new album. If “Hurricanes” (below) is any indication, she just might have pulled it off. Dido will support the album with her first tour in 15 years. Pre-order your copy and see all the live dates here.

Are you excited for Dido’s comeback? Let us know below, or by hitting us up on Facebook and Twitter!