UPDATE: Hey Violet dropped a video in support of “Clean.” You can check it out below. 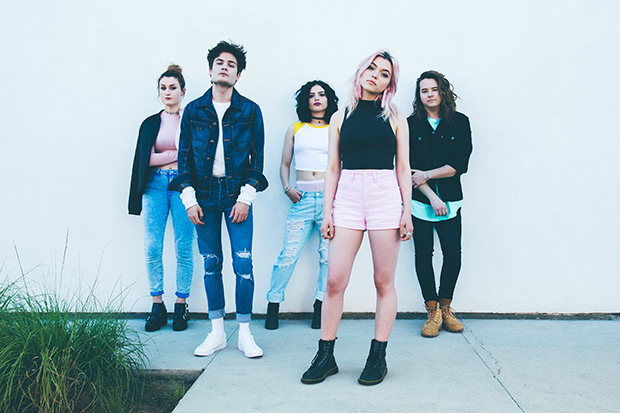 We speak to the Hey Violet frontwoman about the band's 'From The Outside' LP.
MORE >>

A lot has changed for Hey Violet since dropping From The Outside in 2017. For starters, the band had a lineup change and decided to spend 2019 rolling out stand-alone singles instead of jumping straight into another album. And it seems to have paid dividends. The (now) trio’s new music is more accomplished and eclectic than ever — as evidenced by “Better By Myself,” “Close My Eyes” and “Queen Of The Night.” Rena Lovelis & Co. keep their hot streak alive with “Clean,” which is easily their catchiest single since “Guys My Age.”

“I was hooked on you, couldn’t get you out of my veins,” Rena sings in the opening verse. “Half my shit was over at your place and I’m pretty sure our friends are all the same.” However, this isn’t a love song. Instead it’s about the rush of adrenalin you get from escaping a relationship without too much emotional baggage. “Breakups get so messy, don’t know how I came out clean,” she chants on the anthemic chorus. “My conscience is clean, I broke it up clean.” Behind this sudden euphoria, however, lies a heady dose of delusion.

“‘Clean’ is a song that feels somewhere between freedom from a relationship and being in denial with yourself,” Rene explains. “You may be happy to be out of a relationship, but you’re simultaneously trying to convince everyone that the break-up didn’t bother you at all. There is interesting dimension in the song because it’s about loss while also sounding completely celebratory and carefree.” Watch Hey Violet’s animated lyric video below.