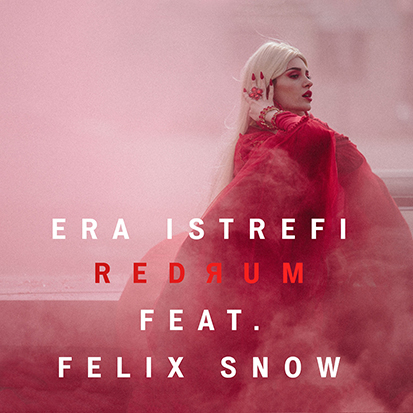 Era Istrefi and Felix Snow's "Redrum" is a worthy follow-up to "BonBon."
MORE >>

Era Istrefi returns today (February 24) with “Redrum,” the Felix Snow-produced follow-up to international hit, “BonBon.” The Albanian diva didn’t waste any time rolling out the video. It arrived a couple of hours after the song premiered and made an instant impression. Directed by Millicent Hailes, the (blood) red-hued clip is a sexy fantasy full of smoke, striking costumes and glamor shots. It’s like a dark and dangerous perfume commercial with an unusually good soundtrack! Expect it rack up those YouTube views in no time.

The 22-year-old established herself as an artist to watch in 2016 when “BonBon” transcended the language barrier and charted around the globe. The 22-year-old promptly landed a US record deal and dropped an English-language version. It didn’t really take off, but she should have more luck with “Redrum.” It’s offbeat and interesting thanks to Felix’s quirky production, but also boasts a strong pop sensibility. If Era’s latest is any indication, her debut LP is shaping up to be a must-hear experience. Watch up top.