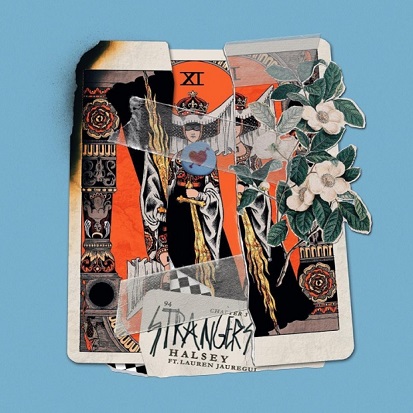 Halsey teams up with Lauren Jauregui for "Strangers," a love song for the LGBT community.
MORE >>

A magazine celebrating Pride by actually featuring a queer artist on the cover? How unusual and refreshing! Halsey poses for Paper alongside model Caroline Miner Smith. They recreate prom poses, make out and generally look bad-ass. In addition to the fiery pictorial, the “Now Or Never” singer also opens up about labels and bi-phobia. “I still see people on the internet saying, ‘Of course Halsey says she’s bisexual. It’ll help her sell albums.’ I never came out as a musician because I was already out when I started making music,” she explains.

“I was out in high school! I was in high school with people walking past me in the hallway calling me, ‘Dyke,’ you know what I mean? That was just a part of my reality.” The hopeless fountain kingdom hitmaker also spoke about groundbreaking duet with Lauren Jauregui. “I struggled with it for a really long time,” Halsey reveals. “I’m not gonna put a straight male on it because he can sing, ‘She doesn’t kiss me, whatever,’ but it’s not gonna be the same and I’m not gonna put a straight female on it, because then that’s just exploitive and weird and makes no sense.”

“And then I thought of Lauren Jauregui, who’s a friend of mine, and the best thing about it is that it wasn’t a compromise.” The duo performed “Strangers” on The Today Show, bringing it to a whole new audience. “The response we’re getting from fans makes my fucking life. The amount of kids who just have just messaged me saying ‘Thank you for this’… And I get it. I’m a young, bisexual woman and finding that kind of representation in music is really complicated.” Listen to the important bop below and check out the shoot up top.